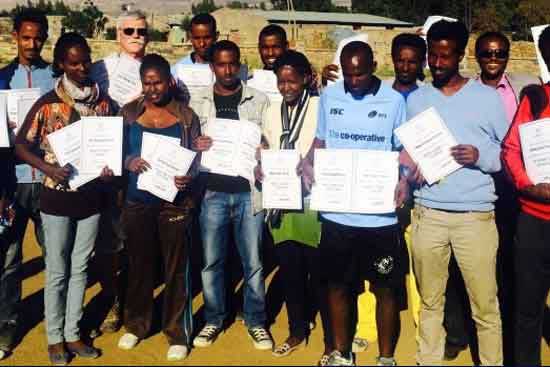 He was based in the sport’s new stronghold, the city of Mekelle in the State of Tigray, where an excited crowd watched the first match officially played.

More importantly than the result, the sporting but fiercely competitive match was controlled by qualified Ethiopian match officials and the sides were prepared by local coaches, graduates of the RLEF Level 1 Coaching Course taught by Safi.

“It was overwhelming to see the enthusiasm applied by the Mekelle sports teachers in learning rugby league”, Safi said. “With the direction of Ahmed Abubeker and his colleagues, along with the guidance of the Region Tigray sports bureau, I have no doubt that we will see the sport develop into neighbouring states in the country.”

The coaching course had sixteen participants from Tigray schools, thirteen male and three female, all of whom graduated with the top two places in the written examination being women.