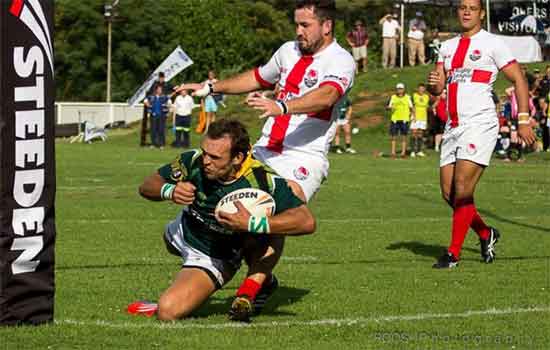 Tuks Rugby League played hosts at Groenkloof Stadium on the 3rd of December 2014 to the first match between the Rhino’s and the Lions and it promised to be a tough one. The Lions had a warm up game against the Western Cape Combined Clubs, but they knew the Rhino’s is a totally different prospect.

The game was tough, with the Lions getting an early lead with tries from Karl Dixon, Fran King, Chris Stephenson and Peter Caddy (one converted by Fran King). The Rhino’s were resolute in defence and their new structures started to pay off as they held the English at bay. The second half ended with the Lions leading 18 to fill against a resurgent Rhino Squad.

The Lions once again scored early in the second half, quickly taking their score to 30 against nil with tries by Iain Davies and Fran King (who converted both tries), when the Rhino’s managed to put Rudolf Prinsloo over for a converted try (Jean Coetzer). This was quickly followed up by another try from Jean-di Oosthuizen, to bring the score to 30 to 10 for the Lions.

The match was a hard-fought victory for the Lions, and you can see the difference in the Rhino Squad as they are benefitting from a continued program to develop and promote the coaching staff to international league levels.

The second match between the Rhinos and the Lions was hosted by Maxxium Sport at Pirates Rugby Club in Greenside. The closing match of the day, it formed part of a Nines Tournament for SARL teams as 2014 comes to a close.

The first match at Groenkloof was won by the Lions with 30 points to 10, and the Rhinos were adamant that they will rectify this matter. The British Lions knew they had a fight on their hands and while the Rhinos made only 2 changes, the Lions brought in 3 new players to face the physical onslaught. The game started hard, and in similar fashion, the Lions drew first blood with Fran King going over for the try, and Jonny Yours sleeping up his accuracy from the Western Cape Game with a great conversion.

The Rhino’s immediately answered and captain Jean Coetzer went over for a try 5 minutes later, which he converted himself. A few minutes later Jean put over a drop goal and the Rhinos were leading for the first time with 7 points to 6. This, however, was short-lived, and Peter Caddy kept up his try scoring rate and went over for an unconverted try, placing the Lions in front. Barely a few minutes later and Jean Coetzer chipped through and dived over for a well deserved try, which he also converted.

With the scoreline at 13 points to 10 for the Rhino’s, a physical battle ensued, and every player left it all on the field as the game became really physical. The Lions were the first to break the deadlock, and Peter Caddy went over near the end of the first half, with Fran King following suit a few minutes later. Both tries were converted by an on-form Jonny Youds, leaving the score at 22 to 13 for the Lions at half time.

The second half started with increased energy in spite of the oppressive heat, and Scott Glassel went over almost immediately, and Jonny Yours converted again. True to the nature of the game, Hein Pretorisu went over shortly afterwards, and Jean Coetzer converted, keeping the scores tight at 28 for the Lions, and 19 for the Rhinos. The defence of both teams were tremendous as the runners tried everything to get past. The forwards were bashing it up the middle with no effect for either side as the game stayed on a knife’s edge. Fran King finally managed to go over in the corner, and Jonny Youds converted, putting the Lions 3 scores ahead at a crucial time in the game.

Jonny Youds stepped into the fray and scored the last try for the Lions, which he also converted, taking the score to 40 for the Lions, and 19 for the Rhinos. The Rhinos still did not let up and kept on coming at the strong Lions defence, and was finally rewarded with a second try for Hein Pretorius near the end of the second half.

The final score of 40 to 23 does not reflect a tremendous game with both teams leading twice in the match. The British Community Lions goes home with a two from two record, but the Rhinos can take comfort in the fact that both games were close affairs and they are showing a marked improvement game on game.

The game was streamed live from Johannesburg (as well as the Groenkloof match), a first for South African Rugby League.