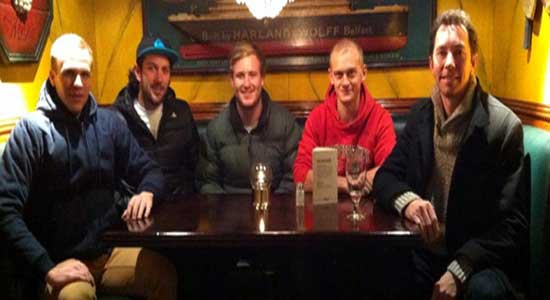 As the newest club in Sweden, we welcome Stockholms Kungar. The idea of starting a new club was proposed earlier this year, and to test the waters a friendly match was played against another new club, the Sodertalje Storm.

Interest has grown since that game, and after a recent meeting the capital city-based team are establishing themselves and moving forward. Their foundation meeting elected an interim board to run the foundations of the club, consisting of Adam Kirk (President), Sam Cammell (Vice President), Pontus Eriksson (Secretary).

As Sweden’s latest addition Stockholms Kungar, or Kings in English, will be representing Stockholms Stad (City).

“The colours and club moniker were inspired by national history,” states foundation President Adam Kirk. “The official emblem and colours for Stockholms Stad is Saint Erik with the colours blue and yellow and it made sense to keep things traditional.”

The board decided to honour both the city and the patron saint, mainly for his impact during his reign from 1160. Stockholm is also the home of the royal family and royal palace, inspiring the Kungar (Kings) moniker.

When asked about the partnership with Forker, Kirk paid thanks to her commitment and professionalism. “It is a great start to have a professional physio on board, as our first and main priority is looking after the players. We aim to make our club as fun, challenging and professional as possible.”

Kirk then went on to acknowledge the potential for growth, particularly with local talent.

“We believe Sweden is an untapped gold mine for rugby league superstars and we are here to help draw them out and develop this sport in Sweden and the capital as best we can. Stockholm is a great opportunity for us to grow rugby league here.”

Sam Cammell, the club’s new Vice President, is looking forward to his new post as the inaugural Head Coach and welcomes the challenge it will bring.

“As a player and a coach rugby league has given me so much, including traveling to different places and meeting friends that I will have for life,” Cammell said.

“I would now like to give back to the game by coaching this team in Sweden and giving people the chance to play the world’s best game in Scandinavia. I am excited to be involved growing rugby league and my goal is to teach new skills while creating a squad of close mates.”

Stockholms Kungar are looking for sponsors and players to join the club. If you are interested in becoming involved in any capacity contact the club for further information via Stockholm.rl@gmail.com