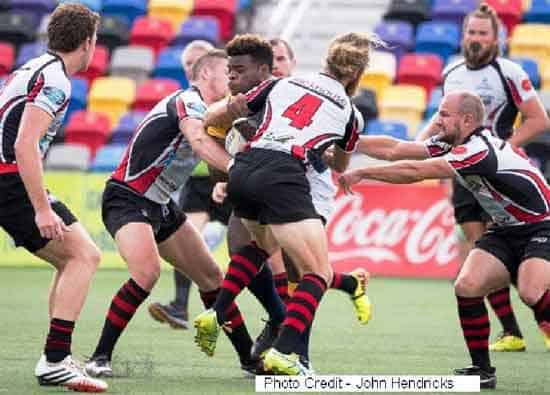 Leeds Rhinos will again show their commitment to help develop Rugby League around the World when they allow two young USA Rugby League players to join them for Pre-season training camp in Florida. “The fact that the Leeds Rhinos, one of the best known teams in the World, are willing to give two USA Rugby League players this opportunity speaks volumes about their desire to see Rugby League grow on a global scale” said USARL director Spinner Howland. “This is the fourth visit to the USA for Leeds and every time they come they not only increase the profile of the sport in the USA, but they have always offered help in development from players to administration ideas.”

Terrance Williams who plays for the Kill Cliff Rhinos USA sister team, the Atlanta Rhinos, and Joe Eichner from the Jacksonville Axemen, will join Leeds for seven days of intense Rugby League training. Both Williams and Eichner are still in college and represent the next generation of players from the USA. They were both standouts during the 2014 season and both earned awards at their respective clubs due to their performance.

Williams joined the Atlanta Rhinos after he was noticed during a Rugby (Union) game when playing for Georgia Southern University. Spinner Howland was in Atlanta during the creation of the new Atlanta team and had a chance to watch a college game where it was clear that Williams was a standout. “After the game I went to Terrance and handed him a flyer about a Rugby League team coming to Atlanta and hoped he would consider attending camp. He showed up in great shape, took a serious approach and was eager to learn from the coaching staff. He made the starting team from day one.” Williams had a great first season in League and he continues to be a stand out for his College Union team as well. This will be his second USA Pioneers appearance after a strong performance against the New Zealand Blue Thunder Police Team in Deland on August 16.

Eichner joined the Axemen from the University of North Florida Rugby (Union) team after hearing stories from other UNF Alumni who were playing the 13-man code over the summer. Coach Matt Keeley was instantly impressed with his fitness and ability to learn fast. He is basically built for contact sports, and at the end of the USARL season put on a “Tackling Clinic” during the National Championship. Like Williams he continues to play both codes and is pretty much a year round athlete. Both players will play for the USA Pioneers on January 11 when they face off against the Leeds Rhinos in Jacksonville.

“These two guys are young, strong and proven they can improve each time they are exposed to the next level”, said Drew Slover, Axemen General Manger. “They are going to be in camp with some of the best players in the World. Guys who have won World Club Championships, played in World Cups, and reached the absolute top of what our sport has to offer. They are also going to be exposed to a coaching staff that is one of the best in the world. This is the type of thing that moves our players, and therefore the game forward in the USA. Leeds needs to be congratulated on a selfless approach that advances the sport of Rugby League in a nation where the game is developing.”

Fans are encouraged to make plans to attend the USA Pioneers vs. Leeds Rhinos game that will be played in Jacksonville on Sunday, January 11. (2pm kickoff) Advance Tickets are only $7.50 and can be PURCHASED HERE!

Merchandise will be available during the game, and for those fans who want to show some support for what Leeds are doing for the sport in the USA, you can also purchase Leeds Rhinos gear HERE!