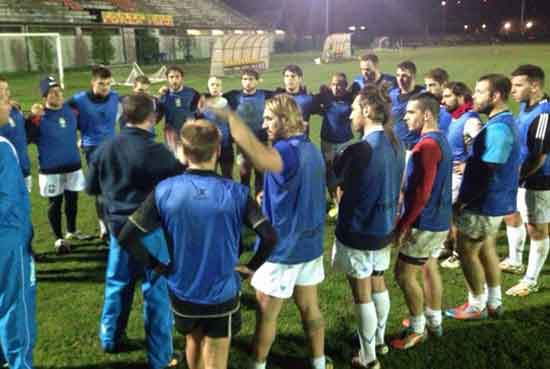 The Federazione Italiana Rugby Football League (FIRFL) recently held a rain affected national training camp again in Vinci, Tuscany from November 14-16 to progress their national development moving into their new year and continuing their national rugby league program in Italy. The federation held the national training camp in the location after a splendid experience in Vinci in late June and had clearly implied that the intention was to repeat the training camps for the national squad for the Italian National Squad again. However, one day was affected by heavy rain downfall – but informative and video sessions provided further and valuable insight for players.

National Coach Ty Sterry called upon eighteen of the best available senior players, but in addition to them a further ten u21 year old players who were selected to participate for further development thanks to a series of training sessions held over a period of time, obviously also influenced from the mid-year r-Evolution League (FIRFL Championship) . The group trained for three days with an objective to create a strong team spirit and utlise the technical mechanisms and development knowledge of the Azzurro coaching staff.

FIRFL’s national coach Ty Sterry stated: “A good national (skill) level has been created – assured Sterry – that will be competitive for the impending internationals that await in 2015, commencing with the end of April. They were three days of very useful work that has helped us understand the princiap aspects (required) to work on, namely skills and movements. Athletes were present from all over Italy and this is significant for the rugby league movement coordinated by the FIRFL that is growing and has gained respected and consideration.”

The FIRFL utilises such training camps as an ideal way to approach international meetings scheduled in 2015 that soon will be defined and formalized . The Federzione Italiana Rugby Football League is working intensively on the national teams’ activity (both youth and senior ones) that is considered as the best expression of their ever-growing movement.

As confirmed by Azzurri team manager Riccardo Marini. “I see growing enthusiasm around our movement and the testimony is the emotional intensity with which athletes participate in these events. The training camp at Vinci will allow us to look closely at the quality of some guys who are within a few months will showcase their skills under to the national coach and even the ten best youth of our movement. They will study closely the mechanisms rugby league and “steal with the eye” from their more experienced teammates and using the advice of National Staff. The work programme will cover all phases of the game. This will represent both the attack and the timing of strong defencs – Marini confirms – in order to understand the mechanisms of our national players and even to those who attended less.”

The federation chose the location that showcased high quality facilities available to enable technicians and the players involved to work in the best possible way.

The FIRFL national programs activities, but not limited to will consist of; define the scheduling of new training sessions for the referees and coaches who already in the recent past have already experienced good results through level 2 coaching and level 1 referee courses undertaken throughout November. Finally, at a national meeting soon, the FIRFL will also set the official dates, the structure and the first meetings for the year ahead, including the fifth Italian Cup that officially opens the FIRFL’s club development level for the 2015 season.