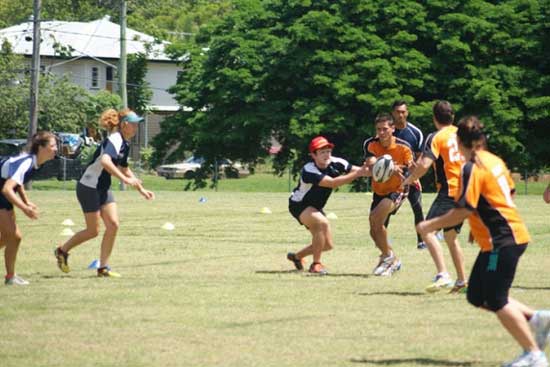 Rugby league has numerous variations apart from the full 13 a side game. It can be played under Touch, Tag, Masters, 7s and 9 a side rules. These variations can be beneficially for regular players to play socially, keep their fitness levels up during the off season or participate in Rugby League in some form.

These variants of the game have been used to help new people develop their skills before they participate in full 13 a side match. In new markets where Rugby League is trying to get started, groups will often use one of these game types to help advance the player’s abilities before a proper 13 a side competition can commence. An individual who has come up with a steady, logical pathway from social to full 13 a side Rugby League is Des Foy.

Des is originally from Oldham, England where Rugby League is commonly known. He currently resides in Ireland and has helped the Rugby League Ireland board over the last few years. He has helped come up with two versions of Rugby League known as Euro Touch and Euro Tag.

Euro Touch
The idea started when Des’ son returned from captain-coaching a Rugby League team in Adelaide, South Australia. His son came up with an idea to start Touch Football club in Ireland and play it under the same rules as used in Touch Australia, RFL in England and used by the ITF (International Touch Federation). What they discovered was that the style of play and skills used under ITF rules were a little bit removed from Rugby League and noticed that it had been used extensively by Union as a development tool for its game. Instead of helping Union, Des along with Rugby League Ireland created a version of touch which was played under Rugby League Rules (called Rugby League Ireland Touch) which would help the 13 player code instead of the XV player version.

After a couching clinic with the RLEF in Italy, Des and his associates renamed the game Euro Touch. This was done to allow RLEF countries to help create a Rugby League culture while still playing a version of the game under League rules and broadening their demographic.

The basic rules of the game are;
• 6 tackle sets with a turnover of possession on the 6th, and for handling infringements,
• (no scrums) all defenders have to retreat 5m (no marker),
• kicking the ball is allowed although the kicker can’t score if he regathers his own kick. Passing after you have been touched is a ‘Touch-Pass’ and results in a tap penalty to the opposition.
• Teams can be mixed and if so female tries count for 2 male tries.

Euro Tag
Euro Tag came about when Des was trying to establish a Munster Student Rugby League team. Due to most of the students coming from Union backgrounds he introduced a game called “Tag the Ball” to help them focus on the ball because most of them tackled from the waist down.

The aim of Euro tag is for a defender to tag the ball. They can also wrap their hands around the ball to slow the play down a bit. These are real Rugby League skills which the other variations (Oz Tag, Touch Football etc) do not teach players. Attackers can also push or fend a player’s hands away and transfer the ball from hand to hand, this helps the attacking players close contact passing and offloading.

Tacklers can stay at marker, however they do not have to stay there. Everyone retreats 5 metres and because the play the ball is fast, it equates to a similar distance to attack and defensive lines in the full tackle version. This allows teams to develop set plays and real game scenarios without fear of injuring someone whilst getting a feel of what it’s like in the full tackle form of the game.

Euro Tag features the same rules as Touch such as the 6 tackle rule, turnover for infringements, offside etc. It also helps broaden the demographic for people who are not up to the full tackle version due to being too young, old or untrained. It has also had a lot of positive feedback and used by different groups around the Rugby League world from places such as Poland, Mexico, Germany, Greece, Spain, Hungary, Scandinavia, Netherlands, France, USA, Fiji and Jamaica.

So the initial pathway of players developing their Rugby League skills would look like this;

Overall I believe what Des and his group has come up with is a logical pathway to develop Rugby League players. Players can start off slowly by playing in a simple touch Rugby League game (Euro Touch) which helps them understand the basic foundations of the game (e.g. playing the ball, 6 tackles rule etc). They then move to the semi-contact version (Euro Tag) which furthers their skills such as wrapping up the ball, offloading and basic structures of attack and defence. They then try the full contact form by trying a 9s game before playing in a full 13 a side match.

The biggest advantage that this pathway has is that it is strictly Rugby League’s version. From the start until the end of the ladder the basic rules and culture of Rugby League is engrained in each level. Players from the start become involved in Rugby League ideals and habits instead of one’s brought in from other sporting codes. Each level is heavily influenced by the structures and gameplay of the XIII player code and allows individuals to participate no matter their skill level.