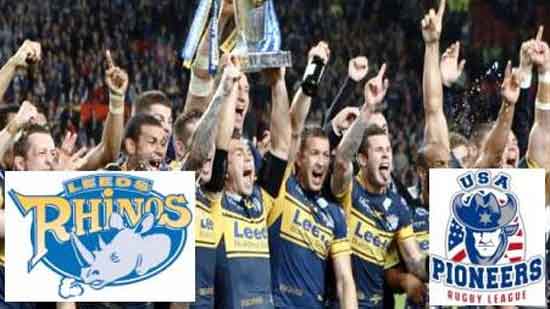 The iconic Leeds Rhinos are set to return to Jacksonville, Florida for the forth time to hold their pre-season training camp. The Rhinos will be hosted at the University of North Florida and will also play a trial game against the USA Pioneers team.

The Pioneers team gives players from across the entire USA Rugby League a chance to showcase their skills while also helping grow partnerships, as well as promote and develop the sport of Rugby League in the USA. The Pioneers team will include athletes from almost all USARL teams, with the Jacksonville Axemen having the most players making the list. (Full team to be released soon)

The game will be played on Sunday, January 11 at UNF and it gives fans the chance to see Rugby League played at its elite level, and also meet some of the best players in the World. Leeds Rhinos have no fewer than four players on the English National team, and have won a number of First Utility Super League Titles as well as World Club Championships.

Players like Kevin Sinfield, Rob Burrow, Jamie Peacock, Kylie Leuluai and Jamie Jones-Buchanan who all took part in the 2008 Australia Day Challenge against the South Sydney Rabbitohs and the 2009 Rhinos Stampede to Florida against the Salford Red Devils, will all return to Jacksonville.

Another exciting part of the event will see players from the Altanta Rhinos, who are the USA sister team for Leeds, have an opportunity to play against the guys they follow from across the pond, and a large fan base from Atlanta is expected to make the trip to Jacksonville for the weekend. Of course many Leeds fans will also make the trip from the UK to not only see their Rhinos play in the USA, but to enjoy Jacksonville during January as opposed to the normally cold English winter. They will be treated to a number of local events and tours, including a behind the scenes look at the Everbank Field and the Jacksonville Jaguars.

Tickets for the Event are now on sale via the Jacksonville Axemen website, with pre-purchase price only $7.50. (Game-day walk up will be $10) CLICK HERE for the ticket purchase page. **Online purchases must print their purchase receipt and bring to the game as their ticket for entry

More details on the Post Game Meet & Greet and other associated events, as well as accommodation options in Jacksonville, will be announced soon.