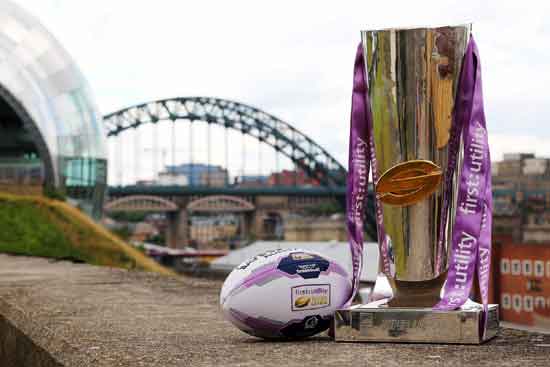 The 2015 season marks the start of a new era for Rugby League and a new venue for Magic Weekend when the 12 First Utility Super League teams play an extraordinary round of fixtures at St James’ Park, Newcastle on Saturday May 30 and Sunday May 31.

Magic Weekend 2015 at the home of Newcastle United will feature three games on each day as well as a fantastic package of fun and activities to keep the family entertained over the whole weekend.

The action kicks off at 2.30pm on the Saturday when Salford Red Devils and Widnes Vikings get Magic Weekend underway. The Vikings claimed their first-ever Magic victory with a 30-24 win against the Red Devils last year and Salford will be doing all they can to ensure there won’t be a repeat.

The sport’s biggest rivals go head-to-head at 4.45pm with Hull FC looking to improve on 2014’s performance against neighbours Hull KR, who won the bragging rights that day with a 38-24 victory.

2014 Super League Grand Finalists Wigan Warriors and Challenge Cup winners Leeds Rhinos will bring the opening day to a close at 7.00pm in what promises to be another classic encounter between the two sides.

Catalans Dragons and Huddersfield Giants get proceedings underway on Sunday with a 1.00pm kick-off. This is the first time the teams have met at Magic Weekend and both will be wanting the two points on offer to press their title credentials.

The fifth match of the weekend sees defending champions St Helens go up against local rivals Warrington Wolves at 3.15pm. The Wolves comfortably beat Saints in the corresponding fixture at Magic Weekend last year but the trophy holders will be out to make amends in Newcastle.

The curtain comes down on what will be a weekend to remember for everyone involved from 5.30pm with a West Yorkshire battle between Castleford Tigers and Wakefield Trinity Wildcats. The Wildcats have a point to make after losing 50-12 to their neighbours at the Etihad Stadium last summer.

Super League General Manager Blake Solly said: “Magic Weekend is long established as one of the sport’s most popular events and from the uniformly positive feedback we have received since announcing that it was heading to St James’ Park, it’s clear that Magic Weekend 2015 will be very special indeed.

“As a top destination city with fantastic travel links and a wide range of accommodation options, Newcastle is an ideal venue for this unique sporting occasion.

“We have worked closely with all the clubs and our broadcast partner Sky Sports to produce a fixture schedule that will ensure that every minute of every match at Magic Weekend matters. And with a comprehensive package of entertainment, both inside and outside the stadium across the whole weekend, I’m sure it will be a truly magical experience for everyone involved.”

Tickets for Magic Weekend 2015 go on sale from 9.00am on Monday November 17 from the 12 First Utility Super League clubs or can be purchased by calling the ticket hotline on 0844 856 113 or by visiting www.rugbyleaguetickets.co.uk

Super League season ticket holders should contact their club directly to claim the best deal. There is an early bird discount of £5 until Monday December 8 on regular priced tickets which start at £40 for the weekend and £25 per day.

All six matches will be broadcast live on Sky Sports.

The 2015 Magic Weekend schedule in full is as follows: