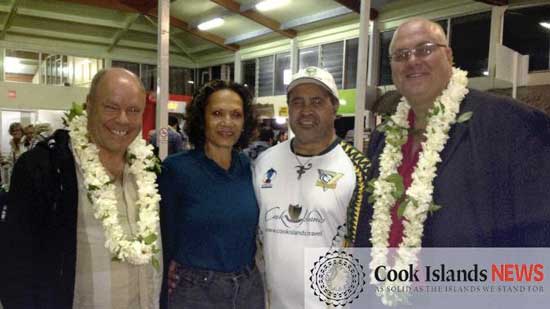 In the week leading up to the Four Nations final, RLIF chairman Nigel Wood checked on the pulse of the game in the Pacific Islands.
His first stop was to meet rugby league officials in the Cook Islands before travelling to Samoa, who have lit up the Four Nations with their thrilling performances and vociferous, colourful support.

He was greeted in Apia by the Prime Minister of Samoa, Tuilaepa Aiono Sailele Malielegaoi.

“It was a pleasure to meet the Prime Minster and there was a keen sense of support for the game and its international dimension on both islands”, said Wood.

“It is quite clear that at the highest levels of Samoan politics, rugby league is keenly understood and its ability to galvanise the nation and be a force for good is not lost.”

Wood continued: New Zealand’s triumph in the Four Nations has brought the curtain down on international rugby league for this year and the result is being factored in to the latest official world rankings which will be released on December 1st.

“While we are still in the process of delivering a long-term, sustainable international calendar – and that has moved on apace – there has been much to admire and celebrate in 2014”, Wood added.

“There are more domestic competition matches being played worldwide than ever before and this is translating into international fixtures from Jamaica to Thailand. One of our key aims is to have more people playing rugby league in more places, more often and that is undoubtedly happening.”

“In support of that aim, programmes to develop more coaches and match officials have been, and continue to be, delivered across both hemispheres and in conjunction with bodies like the European Union. Crowds in places like Canada and Serbia, for example, are highly encouraging as are television audiences.”

“We have seen the launch of a Pacific Development Programme, increased ground level support to South and West Africa plus continued positive news in the United States.”

Looking ahead, he concluded: “We now have the qualifiers for the 2017 World Cup on the horizon and the bidding process for the 2021 tournament taking shape, as well as some terrific international clashes next year, including the culmination of European Championship B and the Kiwis touring England.”

“All in all there are many reasons to be proud of what has been achieved globally in 2014 and genuine excitement for more progress in 2015 and beyond.”