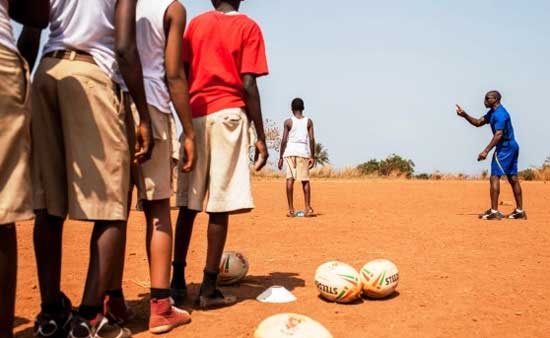 At its board meeting following the successful conclusion of the European Championship, the RLEF has granted Observer status to a third West African country, Sierra Leone – who follow in the footsteps of Ghana and Nigeria – and admitted the United States Association of Rugby League as an Affiliate Member.

Sierra Leone, which completed its application despite the Ebola crisis that continues to afflict the country, drew special praise from RLEF chairman, Maurice Watkins, who said: “Given the current circumstances in Sierra Leone, the achievement is even more notable and it is a credit to the organisation that it continues furthering the sport’s interests in extremely difficult conditions.”

Charbel Raad, the president of the SLRLF, who began playing rugby league as a student in Lebanon in 2003, has put together a dedicated team in Freetown which has been supported by Wales Rugby League through a development partnership with the Welsh Assembly.

“On behalf of the Sierra Leone Rugby League Federation, we are proud to be a member of the RLEF,” said Raad.

“Sport has been a binding element for the local beach boys, college and school students, bringing them together every Sunday to practise, play and enjoy a little competition together.”

The USARL had applied to join the RLEF in August but the European governing body – which has overall Northern hemisphere responsibilities – was keen to proceed in unison with the RLIF, the world governing body, who recently accepted them.

“The USA Rugby League would like to extend thanks to the RLIF and RLEF for instilling their trust and granting our membership application as the governing body for rugby league here,” said chairman Peter Illfield.

“For the past four years we’ve worked diligently towards meeting the requirements and look forward to continued efforts for Full Member status in time for the 2017 Rugby League World Cup.

“My personal thanks go out to the board, clubs, administrators and fans who have played a part in us reaching this tremendous milestone. Our work has only begun and we look forward to reaching even greater heights.”