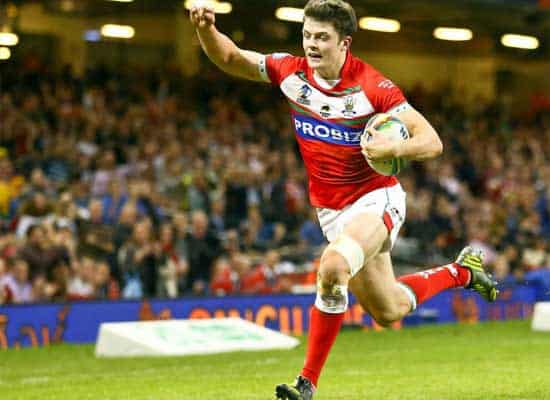 Wales Rugby League released their 2013 annual report covering the period between April 2013 and March 2014. The report highlights the growth and exposure rugby league has achieved in Wales over the last 13 years. RLP look at some of their achievements during the period which are covered in detail in the report.

Wales were joint hosts with England during the highly successful 2013 Rugby League World Cup. Even with the Welsh National side having a hard time during the tournament by going through their 3 Pool games against Italy, USA and the Cook Islands without a win, off the field their involvement in the tournament proved a huge benefit to rugby league in Wales.

In the opening game of the Rugby League World Cup an attendance record for a Welsh International Rugby League fixture of 45,052 was recorded. This was a big occasion for the Wales rugby league as hosts of the opening ceremony. The players themselves, some of who were part time, also played on one of the most famous sporting fields in Wales, the Millennium Stadium.

According to the report Wales Rugby League had “record levels of sponsorship for the 2013 World Cup”. Which for a rugby league nation classed by many as a 2nd tier was a massive positive for the sport.

Showing the benefit of the World Cup in general and especially for Wales the report highlighted that “The direct economic imapct for Cardiff, which hosted the Opening Ceremony was 8.5 Million pounds” based on research carried out by Repucom.

At grassroots level is where Wales have really set the bar for other nations in regards to growing the game in new frontiers. The report highlights the progress made from the year 2000 when Wales were last in the Rugby League World Cup. At that time Wales only had around 110 participants that had experienced some form of rugby league. Fast forward to 2013 and that figure had jumped to over 14,000 with 83 club teams now playing throughout Wales.

The Wales Rugby League administration have done a great job taking the sport forward in Wales. The report doesn’t spell it out but shows how important tournaments like the Rugby League World Cup are for those nations trying to gain some main stream sponsorship and recognition in their own backyard.

In another 13 years’ time it would be great to see Wales Rugby League holding the World Cup Trophy. Then we would really know that rugby league had come of age.

For those who would like to read the full report it can be viewed at: http://media.rladmin.co.uk/docs/2013%20Annual%20Report%20FINAL%20D6.pdf