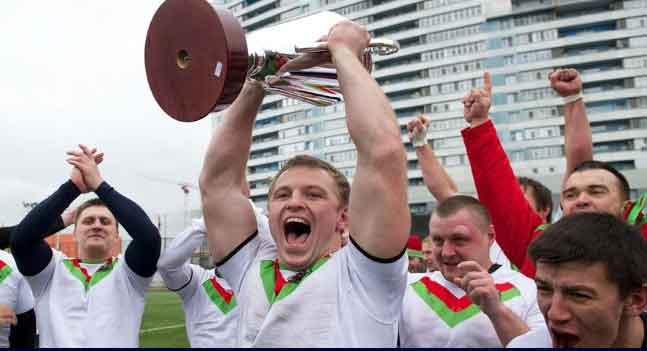 A 32-10 win over defending champions Vereya at the new CSKA stadium, has seen Moscow side Lokomotiv crowned champions in front of over 1,000 fans in the Russian Rugby League Grand Final.

It was the fifth meeting of the sides this season, with the honours even but Lokomotiv were too strong in a match organised by RTC (Russian transport complex) who took over the financing, organization and promotion to make it compliant with the RF Ministry of Sport regulations.

Vereya – who were already without star man Alexander Lysokon – were hampered by the loss of international prop Vadim Fedchuk to a knee injury after only two minutes, the side from Naro Forminsk also seeing Denis Tyulenev go off for the same reason before the end of the opening quarter, which upset their rhythm, especially in attack.

With confidence growing, Lokomotiv added two unconverted in three minutes around the half hour, Victor Nechaev and Denis Korolev going over.

A last minute penalty just before the break saw Vereya on the board, kicked by Edward Ososkov to make it 20-2

Should the match have been drawn, Vereya would have won on points difference in matches between the two – as they started with a 14-point advantage – which again accounted for Ososkov successfully going for goal in the 49th minute, but their claw back was ended in the 56th minute when Anton Zabelin went over in the corner for Lokomotiv.

Nechaev claimed his second score but, with Sergey Konstantinov, Dmitry Bratko and Ososkov trying to fashion a way back for Vereya, Alexey Nikolaev, reduced the lead to 28-10 with Ososkov’s conversion.

Vereya went back on the attack but spilled ball saw winger Korolev pick up and go 80 metres for the final touchdown despite a valiant attempt from Bratko in desperate cover defence.