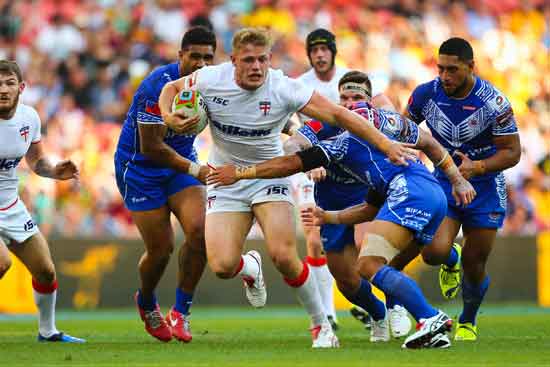 Robbie Hunter-Paul believes the do-or-die nature of Saturday’s Four Nations clash in Dunedin will bring the best out of both his native New Zealand and England.

New Zealand are unbeaten in the tournament so far and England must beat the Kiwis by at least 10 points if they are to secure a place in the final without relying on Samoa beating Australia in the other fixture on Sunday.

The former Kiwi international, who is now Chief Executive of Bradford Bulls, feels New Zealand’s reluctance to lose on home soil will make it extremely difficult for England to realise their own ambitions.

“This game is virtually a semi-final, both coaches will be saying to their players that this is a must-win situation and just because the Kiwis have won all their games, it is no foregone conclusion that they will reach the final,” said Hunter-Paul.

“England were robbed of the game against Australia but New Zealand have been playing extremely well. They have a big pack that can deal with England, no problem.

“There are some real gems that have been uncovered in the Kiwi squad including Shaun Johnson, who seems to always make something out of nothing, and Manu Vatuvei, who finishes strongly every single time he has the ball: however the team is a far from a completed product.

“But England have their own stars, Chris Hill, the Burgess brothers, Tom and George, and James Graham have all impressed me.”

Whilst ostensibly a home fixture for New Zealand, the game will be played in Dunedin, which is not one of the well-known Rugby League heartlands in the country.

“New Zealanders are extremely patriotic so rugby fans will turn up no matter what but they just won’t be the traditional Rugby League supporters. Playing in Dunedin is no big an advantage to New Zealand,” said Hunter-Paul.

“Of course I am extremely biased and the odds are with the Kiwis, they’re on home soil, there is a confidence brewing within the team but they can’t be thinking of the final already, they must focus on this game. They have to replicate the dominance and ad-hoc kind of rugby they have shown.

“England have a lot to prove, losing against Australia last weekend and being beaten by New Zealand in the World Cup semi-final last year means that they will be out to make amends. It is so important that they respect the ball against the Kiwis or else they’ll be in trouble.

“On the other hand, they have nothing to lose and they are such a young squad, they’ll be wanting to live the fairy tale.”