The Kangaroos came from behind to see off England in the second half but will need to defeat Samoa by a big score to ensure a spot in the final. Points difference could prove to be crucial if England beat New Zealand next weekend.

AAMI Park was treated to an engaging match as the English threw everything at the world champions.

Again the Kangaroos suffered injury problems, with Beau Scott forced off with a hamstring complaint in the 10th minute.

The Australians were the first to score, through Michael Jennings. Daly-Cherry Evans put Greg Bird through a hole from an inside ball and then Bird found Jennings in support.

The Roosters centre beat Sam Tomkins on his way for the try after 17 minutes.

England was making in-roads in the Australian defence, making several line breaks, but was unable to finish them off. They should have scored in the 29th minute after Hall made a 50-metre break. He passed the ball to Daryl Clark, who dummied and went himself when he should have passed, and Greg Inglis dragged him into touch.

But the referee awarded England a penalty for that tackle and they were much more clinical in the next set. The ball was moved wide quickly, cutting out several players, and Kallum Watkins crashed over.

They extended their lead to eight just three minutes later. A flick pass from Dan Sarginson put Hall in enough place to sneak in on the left wing.

The Kangaroos bombed a certain try two minutes before the break when Jennings got past two defenders but his offload to Josh Mansour sailed into touch.

England went into the half-time break 12-4 in front. They were the slightly more dominant side in the first period, completing more of their sets and making more line breaks.

In the second half Australia had a try to Greg Inglis disallowed because of obstruction. The Souths fullback raced through a small hole to score but the score was ruled out because Matty Smith had been taken out.

Tim Sheens changed the mix-up of his side after 53 minutes with Ben Hunt coming on and taking the hooking rule and Smith moved to lock. The tactic worked with the Kangaroos attack improving, Smith grubbering in behind for Hunt to score a try on his international debut.

Australia hit the lead on 63 minutes. Cherry-Evans made a half break, dummying left and then finding Inglis in support for the vital try. Smith’s conversion gave the Kangaroos a four-point lead.

It was a nervous final 17 minutes for the Aussies with England pushing for the winning try. But some good kicks from Hunt kept the English pinned down in their own half.

England rained down bomb after bomb in the last few minutes but Australia’s line held firm.

In the end it was just a fingernail and an ounce of luck that was the difference with the Kangaroos escaping with a win. England can still reach the Four Nations final if they beat New Zealand next weekend. 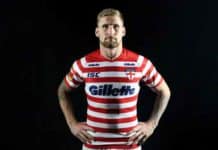