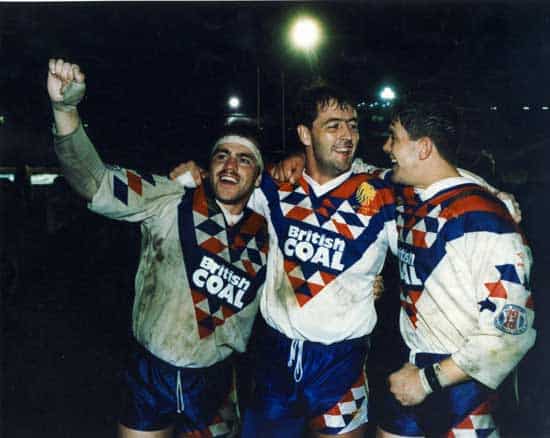 Super League Coach of the Year Daryl Powell is pleased with the way England performed against Samoa and believes that the game against Australia in Melbourne on Sunday will be another close encounter.

The Castleford Tigers coach is looking for another big performance from England’s forwards as they take on a much lighter Australian pack who are out to impress their coach Tim Sheens and avoid failing to reach a major final for the first time since 1954.

“The key to the Samoa game was that they won it and they did that,” said Powell. “The England team hadn’t had much preparation in the lead up to the game and the warm conditions made it tough.”

“I thought the pack stuck to the job and George Burgess never took a backward step, he played a big part. Daryl Clark made an instant impact and Michael Shenton knows the way he plays so it was great to see him supporting and come up with the first try.

“I can’t see much between England and Australia. It’s going to be a really close game on Sunday. The Aussies will feel confident that they can turn it around after the New Zealand defeat.

“Our pack can dominate down the middle and with two great hookers supporting I’m sure we’ll be able to break them down. We’ve got quality on the edges, too, which can cause anyone problems.”

Powell played at centre during Great Britain’s famous second Test win against Australia in 1992 and vividly remembers how over-confident the Australian’s were that night.

“After getting beat in the first Test we were completely written off for the second,” said Powell. “It was a strange feeling but there was no pressure on us in Melbourne.

“It was an unbelievable first-half performance from us, it just flew by. Malcolm Reilly was really excited in the changing rooms at half-time with everything that was going on.

“The whole team gave 100 per cent that night and I remember the support we got from the fans in the stadium being amazing.

“At the end of the game the Australians must have thought they were going to win because ‘We Are The Champions’ was being played over the stadium sound system! This still makes me smile when I think about it.”