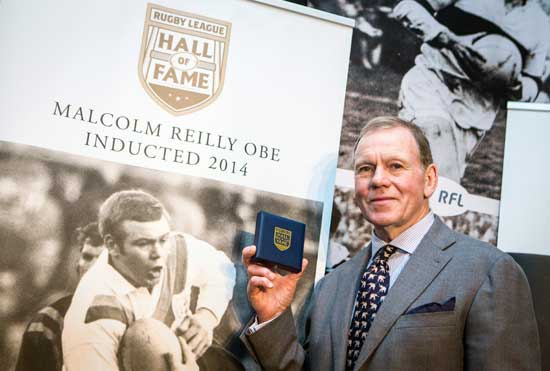 Rugby League legend Malcolm Reilly OBE believes England are primed and ready to book their place in the final of the 2014 Four Nations by beating Australia in Melbourne on Sunday.

England will go into the match buoyed by an encouraging performance in their opening victory over Samoa, when they defied the lingering effects of jetlag and 30-degree heat to overcome spirited opponents in a 32-26 win.

Australia, by contrast, head for Melbourne looking to bounce back and restore national pride following a surprisingly one-sided 30-12 defeat at the hands of New Zealand.

For Reilly, the former Castleford, Leeds, Newcastle Knights and Great Britain coach whose achievements saw him inducted into the Rugby League Hall of Fame earlier this month, that combination of circumstances leaves England well placed to score a rare win against the world champions.

“I think England played extremely well at the weekend, Samoa are an under-rated side but England got it together and got the result, which was crucial,” said Reilly. “They can also learn a lot from that performance.

“These sorts of games don’t come around often and it’s not like in the league when there’s always next week: they must focus and concentrate for the full 80 minutes.

“Steve McNamara has put together an impressive team and I think they have a lot of self-belief. I’m sure they will go into the game against Australia full of pride.”

The nature of Australia’s 30-12 defeat to the Kiwis has shocked the 2013 World Cup winners and Reilly believes this is the perfect time for England to strike.

“Australia couldn’t cope with New Zealand at the weekend, they do have a few players out but they are still a force to be reckoned with,” said Reilly. “England do not have the best track record against Australia but I believe they have a good chance to start to change that on Sunday.

“Australia are not as dominating as they have been in previous tournaments and England have a quality side who have the best opportunity in recent years to make it to the final.

“It will be a big challenge but I believe they have what it takes to do the preparation and get it together for the weekend, if they go into the game with a positive attitude, they can beat Australia.”

England v Australia at AAMI Park, Melbourne, will be broadcast live on BBC Two on Sunday November 2 from 4.30am.