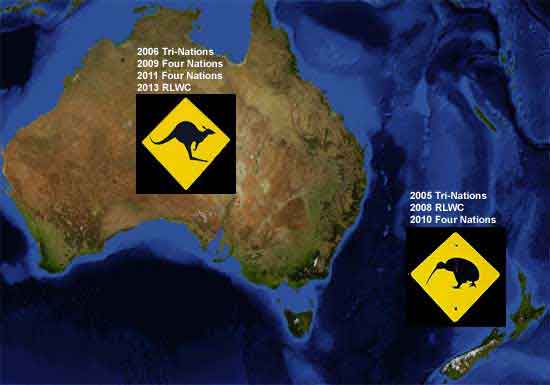 Smith: Mayday! Mayday! I need help. My forwards have lost power and we can’t go forward, over.

Sheens: Divert all backup power to the backs and stay the course, over.

The Australian forwards were well and truly owned by the Kiwis pack on Saturday night. With all the hype around SOO being the pinnacle of the game in Australia’s eyes, the Australian’s just had a lesson in the basics of rugby league at Suncorp. I don’t know how many times over the years I have heard the Aussies claiming they could send out their 2nd best team and still dust up all comers on the world stage. Well I think that theory has just been thrown right out the window.

Welcome to the 2014 Rugby League Four Nations. Where the Aussies are bottom of the Four Nations table, The Kiwis are on top of the World, The Poms are looking towards this Sunday with smiles on their faces and Samoa have just become the competitive 4th nation rugby league has been longing for. The rugby league romantics couldn’t have dreamt up a better script for the first week of the 2014 Four Nations Tournament.

Australia went down to New Zealand 30 – 12 on Saturday night in a packed Suncorp stadium where 47,813 fans were on hand to witness the rise of Samoa and the change in Rugby League World order. Could this be the tipping point rugby league has waited for since 1954? There have been signs that the Kangaroos world domination could be coming to an end but nothing like what we have seen over the last 10 years.

The 2005 Tri-Nations was the first major hiccup for the Australian’s. The Kangaroos lost their opening game in the series to the Kiwis 38 – 28 in an entertaining match. Then at the end of the series the Kiwis did the unthinkable and smacked the Kangaroos again 24 – 0 in the Final at Elland Road, Leeds to win the Tri-Nations series for the first time. The Kiwis had finally come of age!

When the 2008 Rugby League World Cup rolled around in Australia, as per normal the Kangaroos were un-backable favourites to retain the World Cup. But no one told the New Zealanders that. At Suncorp Stadium in front of 50,599 fans (A record test crowd in Brisbane at the time), The Kiwis caused a major upset and won the World Cup and World Champion status for the first time on the back of a Billy Slater howler 34 – 20.

The Kiwis backed it up when in the 2010 Rugby League Four Nations they met the Kangaroos in the Final at Suncorp. In a hard thought Test the Kiwis left it to the last 2 minutes of the match where some Benji Magic snatched victory from the Kangaroos 16 – 12. Now the Kiwis had racked up three significant series wins (2005 tri-Nations, 2008 RLWC, 2010 Four Nations) over the Aussies.

So in 2014 with their first up loss in the Four Nations tournament could Australia finally be letting go of their decades long domination of World Rugby League? On Sunday afternoon in Melbourne all will be on the line for Australia against England. If the Aussies win they live to fight another day and possibly make up for their slow start by winning the Four Nations Tournament. If they lose Australia’s demise as a rugby league powerhouse will be complete. A loss will mean Australia will miss the final of a major tournament for the first time since the 1954 Rugby League World Cup.

It’s the moment the international game has been waiting for and come Sunday afternoon the rugby league world order could change forever!