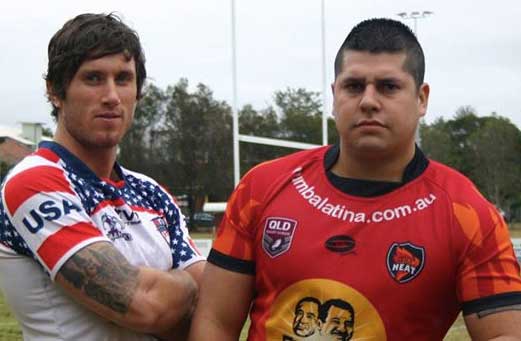 The Heat have also expanded their international appeal around the world by building a sister-club relationship with Mancuians RLFC in Manchester in the UK and are currently assisting in helping to bring Rugby League to Latin America. The Latin Heat has started up a similar project in the Land of The Free and The Home of the Brave…the United States!

The main person behind the Latin Heat project in the USA is David Esquibel who currently resides in California, USA. The project started in May 2014 due to David’s direct contact with Latin Heat founder and co-ordinator Robert Burgin (Australian based). The (Latin Heat USA) project is still in an ongoing process and has a few devoted individuals who are trying to spread the Latin Heat brand on the US west Coast. Recently the Latin Heat USA had sports designer JIC design a few Latin Heat Balls for training.

Although in its infancy, the potential for the Latin Heat-USA is HUGE! In the USA there are about 50 million Latin Americans living in the country. In the long term, it is hoped that a Latin Heat USA team could play and represent the Latin community in the country. The Latin Heat Australia has already helped promote and develop Rugby League in Latin America via Australia for over 12 months now, if something similar were to happen via the United States, the potential could be enormous!