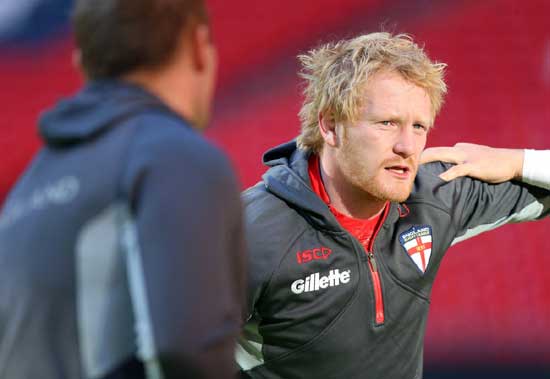 England captain Sean O’Loughlin will miss the opening match of the 2014 Four Nations against Samoa at Suncorp Stadium, Brisbane on Saturday October 25 (kick off 4.00pm local).

The Wigan Warriors forward has a problem with his quad sustained in the First Utility Super League Grand Final 11 days ago and has been unable to recover in time for the match in Queensland. Canterbury-Bankstown Bulldogs prop James Graham will take over the captaincy – a role he did during England’s 2010 Four Nations campaign in the southern hemisphere, when he replaced the injured Adrian Morley for the duration of that tournament.

O’Loughlin is making good recovery and is expected to figure in England’s second match against Australia in Melbourne on November 2.

Wigan’s Joel Tomkins starts in the pack alongside his team mate Liam Farrell.

“It is a shame that Sean (O’Loughlin) misses the match with a problem with his quad,” said England coach McNamara.

“The Samoa match has come too soon, but we remain confident he’ll be ready for Australia the week after.

“James Graham will take over the captaincy for this game. He is a great leader and we saw that with the Bulldogs this season in the NRL where he single-handedly led them to a Grand Final.

“He leads by example and gives 100 per cent effort in everything he does. He inspires everyone around him to follow his lead.

“We have four players in the squad making debut. They are ready. They’ve been in our system for a long time. All four have been in great form during the Super League season.

“There is a slight evolution to the squad this year with some new faces on show. The debutants are exciting and they can prove themselves on the international stage.”

The match will be broadcast live on BBC2 with the programme starting at 6.30am (BST).

Four Nations highlights will be broadcast on BBC1 at 1.00pm (BST) on Saturday October 25.

A full video interview with England coach Steve McNamara will be available from 4.00pm (local). To download, please go to http://sltv.therfl.co.uk/ the file is called england_mcnamarateamannouncement_hd.mp4

The England side to face Samoa at Suncorp Stadium, Brisbane on Saturday October 25, kick off 4.00pm (local) is as follows (professional club and community club in brackets):