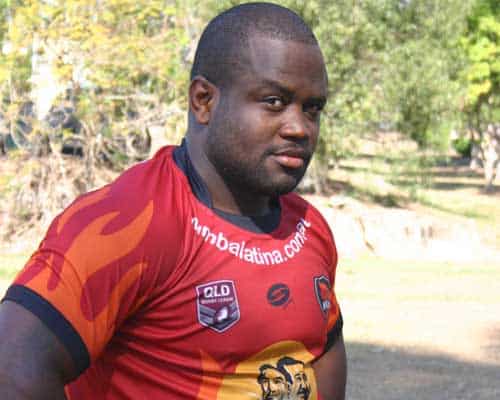 “Why is he not playing NRL?”

That was the question from one prominent rugby league pundit after fullback Kevin McKenzie made a stunning debut for Latin America at the weekend’s Mitchelton Nines tournament in Brisbane.

Proving that rugby league has tapped only a fraction of its potential market for players and fans alike, McKenzie well and truly put his home nation of Guyana on the map.

No, not Ghana or Guinea in Africa, but Guyana – the South American nation of less than one million people that sits above Brazil on the Caribbean coast line.

Even some of McKenzie’s teammates from Colombia – separated from Guyana by just two borders – admitted they knew very little about the country before meeting the Georgetown flyer.

In truth, McKenzie had been one of the inspirations behind the formation of the GYG Latin Heat more than a year earlier, with his performances in Queensland’s State League making it seem a shame there was no international pathway to encourage South and Central Americans.

Getting McKenzie into the GYG Heat squad had always been a priority, but with work, a newborn son and travel providing obstructions, the planets never quite aligned until recently.

His first touches of the ball at the Mitchelton Nines showed it had been worth the wait, with defenders cast asunder when McKenzie scored for an early 4-all scoreline with host team Mitchelton Panthers.

Though the Latin Americans ended up on the wrong side of the scoreboard, 14-4, McKenzie made tackle break after tackle break in attack, while providing a formidable last line in defence.

Fellow first-gamers Eddie Wegener (Chile) and Sean Day (Peru) were also impressive, laying the platform forward with strong charges up the centre of the field.

A much-anticipated clash with 2013 World Cup semi-finalists the USA Tomahawks was next on the agenda – the first rugby league match between a North American and Latin American side.

McKenzie and young tyro Jaden Laing were again impressive, with Laing scoring a powerful 30m try down the left flank.

More symbolic of rugby league’s progress though, was the performance of ‘Conejo’ (The Rabbit) Diego Gil Vejerano, who learnt of the sport less than a year ago.

One of several Heat squad members from Bogota, Colombia, Gil Vejerano made three try-saving tackles in defence and a zippy touchline break to display his rapid improvement.

Though the USA triumphed 26-4 in the long run, the Tomahawks were forced to the edges of the field to score and found no easy path through some admirable defence.

Having qualified third in Pool A, Latin America then drew tournament surprises Pine Rivers in the Plate semi-final.

The Bears had just six players moments before kick-off, but rallied together a spirited side for a keenly-fought match.

Another Latino speedster – El Salvador’s Edwin Ventura – this time took prominence with a swift touchdown and a great try-saving effort in defence.

McKenzie was once more brutal, while prop Day scored his first try in Heat colours. Only two late tries from Pine Rivers saw the score blow out to a deceptive 34-16 margin.

As the tournament progressed into the night, a sublime Dayboro took out the main prizemoney with an emphatic 30-14 win over Iron Brothers.

Brought together from Aspley and Logan Brothers clubs, Iron Brothers caused the upset of the tournament by dumping the USA side in the knockout stages.

Mitchelton triumphed in the second tier Cup, while Pine Rivers progressed to win the Plate final.

The Latin American men’s side will welcome several players back into the fold for next Sunday’s international 13-a-side match against Portugal at Woollahra Oval, Rose Bay (kick-off 3pm).

Meanwhile their spirits have already been buoyed by the effort of the first Latin American junior rugby league side – the Latin Heat Under 16s, who were unlucky to miss the finals of the Harmony Cup at St Mary’s, west of Sydney.

Brought together from far and wide, the Latino teens surprised many by pushing reigning champions Greater Western Sydney to a narrow 10-6 loss in their debut appearance.

Jubilation ensued when the Heat youngsters triumphed in their next start, another 10-6 scoreline, but this time in their favour against NSW Young Achievers.

Azuri (Italy) Country were next opponents on the list and it was another tight affair, won 18-6 by the Italians.

A strong win in the final pool game would have tipped Latin America into the semi-finals, but unfortunately the team drew Western Sydney Indigenous – eventual champions – and suffered an 18-0 defeat.

Still the signs were encouraging for Latino rugby league into the future, with several strong playing partnerships and friendships formed.