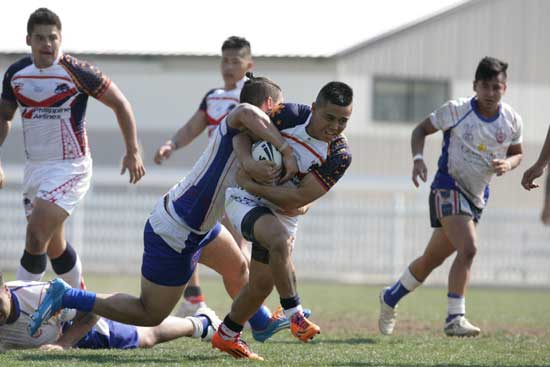 On the eve of the biggest Rugby League event of the year the NRL Grand Final, on Saturday the 4th of October, 3 League minnows were preparing for history in the Western Sydney suburb of Wentworthville.

The canteen area of the stadium had gone from the traditional Aussie smells of sausage sangas and steak sandwiches, to the streets of Manila and Bangkok with Pork Adobo and Pad Thai filling the air.

The Junior Tamaraws defence was rock solid all game, not letting the Thailand cross the tryline in either half. This paved the way for the Tamaraws to strut their attacking prowess.

With more ball in hand than Thailand, Thai players’ energy levels decreased quickly. This gave the Tamaraws freedom in attack allowing them to throw the ball around against a tiring Thai team.

When the fulltime whistle had blown the scoreboard read 48 nil to the Junior Tamaraws.

Tamaraw’s Captain Ricky Kucia ended up with 4 tries and was awarded the man of the match and the players player award.

The showcase event of the day between The Philippines and Pacific Island Nation of Niue had finally arrived at 4.15pm. Both nations stood proud while singing their respective national anthems.

Soon after the anthems, Niue performed their Haka. This was the first time the Tamaraws faced up against a Haka. A Haka which the Niue players did performed with passion, which included an enthusiastic advancement towards the Philippines line. This created a great atmosphere for the crowd and built great tension between the two teams before kick off.

There was plenty of passion in the air as this would be the greatest Rugby League test for both nations. Since they are both looking at pushing for form and for a position in the next Rugby League World cup in 2017.

The game kicked off and we were underway. Both sides looked strong in defence and seemed quite even in the first 10 minutes of the contest. The Tamaraws had a couple chances to get on the board but poor handling errors stunted any attack which the Niue pounced on and scored on their left edge in the 10th minute taking Niue to a 6 nil advantage. Niue then scored a long distance try in the 17th minute to take the score to 12 nil. 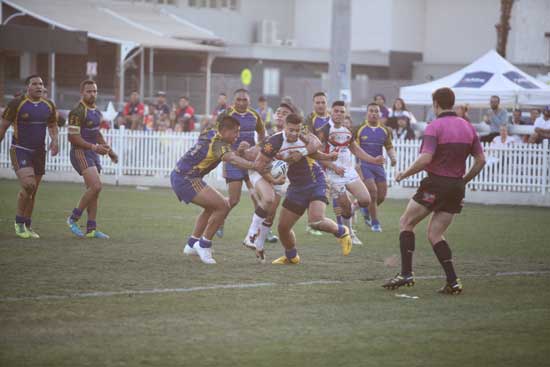 The Tamaraws started to get back into the game but just couldn’t get over the try line due to Niue’s firm defence.

Before the halftime break, Niue was able to notch in 2 unconverted tries taking the score to a 20 nil lead at the break.

The Philippines needed to come out of the break with greater enthusiasm and crispness in attack to have any chance of a comeback. They were able to show some stealth but Niue transferred their first half form into the second half resulting in an early try taking the lead to 24 nil.

With a large deficit, the Tamaraw clicked into gear thanks to some good field position and a tiring Niue pack. Crafty Tamaraw fullback Will Dreves was able to take advantage of good ball and crossed adjacent to the posts taking the score to 24 to 6.

This try seemed to cause a pendulum swing into the Philippines’ favour, until Niue were able to hit back again increasing the score to 30 to 6.

The Philippines were able to hit back through former Melbourne Storm star Paul Sheedy in the 62nd minute and then through the lock forward Brian West in the 68th minute. This had taken the score to a 30 to 16 score in Niue’s favour.

The crowd and the players felt a comeback was brewing until Niue again hit back taking the score to 36 to 16 with not long to go. Any chance of a comeback had been ruled out as time had beat the Tamaraws but a late consolation individual try by Paul Sheedy took the score to a more respectable 36 to 22 win for the Niue side.

The Philippine Tamaraws only have a short break until their next test match against Vanuatu in Vanuatu on the following Saturday the 11th of October.

The more of these hard games the better for the Philippines, as they try to develop and strive into becoming a 2017 Rugby League World Cup contender.