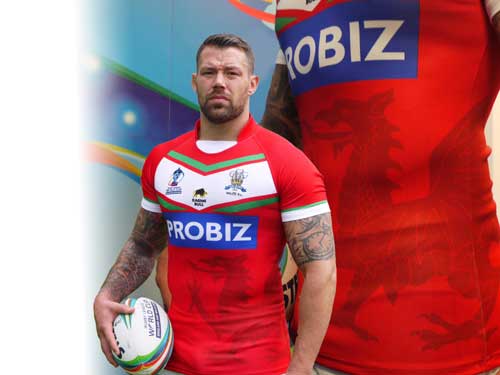 New Wales coach John Kear has named a 22-man squad for the 2014 Rugby League European Championships this October and November.

The line-up is picked from 14 clubs across four professional leagues, with players from the table-topping sides of both Super League and the Championship being represented.

Also in line to make their full debuts are former Scorpions Joe Burke and Dalton Grant who both played this season with Barrow Raiders after only just missing out on World Cup selection last year. Haverfordwest-born Yannic Parker, who played for Oxford, Brecon-born Izaak Duffy, who is with Gloucestershire All Golds, are the other new arrivals.

North Wales Crusaders are represented by Rob Massam and Christiaan Roets, both of whom starred and scored tries for Wales in last year’s World Cup. North Wales born Rhys Williams from Mynydd Isa, who will be at London Broncos in 2015, returns from a season in Australia to play for his country, as does Bridgend-born Ollie Olds.

Kear said: “We’re naming an exciting squad for this tournament with many home grown Welsh players. This in itself indicates true progress for the game in Wales.

“I see the tournament very much as a marker for the development of Welsh players in the international scene. We have a few players missing for various reasons but this gives young players a chance to put their hand up to mix it in future years.

“I want the team to perform to the maximum of their abilities and for unknowns to push themselves to forefront. Youngsters like Connor Farrer, Jordan Sheridan and Matty Fozard spring to mind and this is their chance to make a name for themselves at the highest level.”

Castleford Tigers’ Dan Fleming will be keen to add to his caps tally after missing out on last year’s World Cup and spending much of the season on the sidelines through injury.

But coming back to the Wales fold after 14 years out is Fleming’s 2014 club team-mate Garreth Carvell who last played for Wales in the 2000 World Cup. Following this, injury kept him out of the side for a few years before he got a chance with Great Britain in the 2006 Tri-Nations, then for England in the 2010 Four Nations.

Kear adds: “Garreth enjoyed playing for the Welsh team all those years ago and when I spoke to him about it, I was pleased with his response and how keen he was to come back.

“I’m expecting him to be a stalwart in the side. At 33, he is our oldest player, while Connor Farrer, at only just 19, is our youngest. It’s good that we have old hands helping through the up and coming lads and it bodes well for this tournament and the future of Wales Rugby League as we continue to build towards Rugby League World Cup 2017.”

Tickets for Wales v Ireland will be on sale soon at www.walesrugbyleague.co.uk. More information will be posted when these are available.