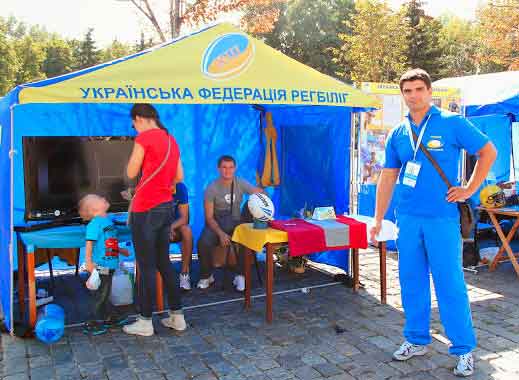 Under the slogan ‘Unity in Sport’, the Ukrainian Rugby League has scheduled their Grand Finals day, to climax the Championship season, at the prestigious Star Stadium in Kharkiv, on the 4th and 5th October.

Four teams have made the deciders from the two pools of regular season competition, encompassing eight sides in all, the semi-finals seeing Legion XIII, Kharkiv taking on RC Kivvy Rog Rhinos and Titans, Donetsk facing CEPU, Simferopol on the Saturday.

The following day the losers will play for third and fourth place while the winners contest the title.

In the lead-up, URL took part in a sport fair in Freedom Square, Kharkiv, with more than 1500 athletes and 50 federations in attendance.

It began with a parade in front of the major’s deputy Alexander Popov, the head of the department of the Youth, Family and Sport Affairs who commented that not only did the event unite those with a love of sport but that, hopefully, it would attract more youngsters to get involved in what was now the sport capital of the country.

The square was divided into six sectors and included the best coaches, sport fitness instructors and popular players from each sport who held master classes, with rugby league heavily represented and extremely popular.

One of the main events in the programme was official congratulations to Ukraine RL skipper Aleksanedr Skorbach and his wife Irina on the occasion of their wedding.