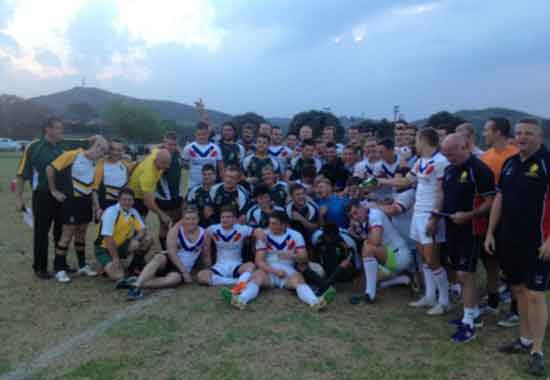 It was a glorious day at Groenkloof Stadium in Pretoria when South African Rugby League hosted the GB & I Students this past Saturday, the 21st of September 2014. The third, and final, match of the season saw a buoyant GB & I side run on the field, strengthen by their two wins to date.

The SARL Students last played in the Student World Cup, and only a few players stayed behind as the rest went up to the Senior Squad, but none the less they were adamant to mount a strong challenge. The GB & I Students got off to a strong start with a few quick tries, that were successfully converted.

Halfway through the second half, their momentum picked up after South Africa failed to find touch on the penalty and they went over the line for two more tries. The South African Students fought back strongly and a good move saw them on the Lions’ try line. a handling error cost them dearly, and for the rest of the half the Lions managed to keep the Students from scoring, and both sides went back to the change rooms at half time with the scores at 32 to nil for the Lions.

The second half started fast and the SARL Students attacked in waves, and finally a good move saw Rupert Wells go over in the corner for a great try. Unfortunately it was not converted, and the Lions answered quickly with a converted try. For the next twenty minutes there sides changed sets and attacked each other’s mainline, yet falling to break through. An off the ball incident saw a SARL player red carded and a Lions player sinbinned for ten minutes.

The SARL students managed to hold on and even send Rupert Wells over for another unconverted try in the corner. However, the ten minutes passed and the Lions were suddenly a man up. In a tiring, physical game such as this one, that one man makes all the difference and the Lions were quick to capitalise on the numerical advantage and ran in a brace of tries.

The final score was 56 to 8 for the Lions, and every player knew he had played in a tough, uncompromising matches. The man of the match for the Great Britain and Irish Lions was Anthony Squires for his four tries, and Rupert Wells was the SARL Man of the match with his two great tries in the corner.

All in all it was a hard, uncompromising match, and the South Africans showed the potential that makes South Africa a potential hotbed for the sport of rugby league. Many thanks to both teams for the great spirit in which the game was played.