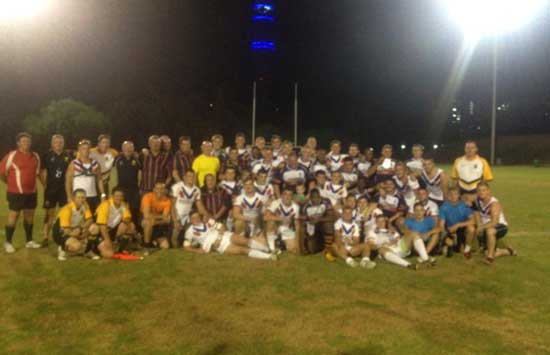 The touring GB & I Lions played a friendly match against the current National Club Champions, Tuks, on Wednesday 17 September 2014. The home team started on the back foot when the match official awarded a penalty kick at the start for being late in to the field, and with ferocious attacking from the visitors, the team looked flustered and conceded a brace of tries at the start.

Anthony Squires went over in quick succession, and additional tries by Mike Connor, captain Blake Mahovic, Josh Dixon, Jordan Sheridan and Jack Howdle were successfully converted by Dan Parker. The crowd was treated to some great rugby league, and the experience of the GB & I team showed.

A half time score of 48 to nil bode ominous for the hosts. However, Tuks are not National Club Champions for nothing, and in the second half they regained their composure and held the visitors at bay with some gutsy tackling. Johan Joubert went over for a converted try for the hosts, and the hosts regained their composure to hold to the rampant GB & I to only 20 conceded points in the second half. Josh Dixon and Tom Hughes crossed the white line for their second and third tries in the second half, and some of the conversions proved far trickier from out wide for Dan Parker.

The last quarter of the game was brutal, with not a quarter given easily, and both teams repeatedly attacking the gain line with intent. Some great rugby league was played, and the spectators were treated to some great running of the ball, and quite a few charging runs up the middle. In the end the score styled at 66 to 6 for the visitors, which does not reflect the massive battle on the field. Tuks walked away with their heads held high, and quite a number of new players were welcomed to the select few to have faced the GB & I Lions.

GB & I coach Paul Fletcher was very impressed with the Tuks squad and complimented Tuks coach Fanie Bredenhann on fielding a great team with 9 rookie players. Both teams got together after the match, and the camaraderie was evident. Many thanks to the match officials and club administrators who worked tirelessly in the background to make this match such a great success.