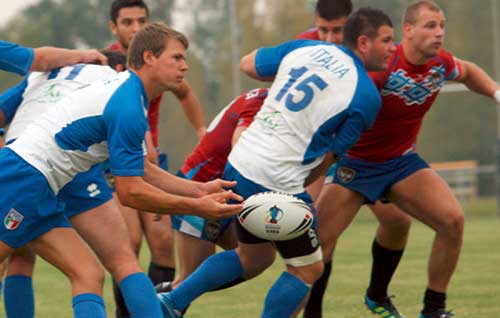 Serbia coach Marko Janković has named four uncapped players in his 20-man squad for match six of European Championship B 2014-5 as his men face Italy at the Makiš Stadum, near iconic Lake Ada, in Belgrade on Saturday (20th September).

Milan Čobanović (Dorćol) Nikola Srbljanin (Partizan) and Red Star pair Miloš Kostadinović and Vuk Štrbac are included for the first time after starring in a trial match where Serbia ‘A’ defeated Serbia ‘B’ 38-16 in an historic first game in Ub, 60 km south-west of Belgrade, where a new rugby league club has been recently established in the town.

“It is always big challenge to play against Italy, which is huge sporting nation,” said Janković. “Respecting that fact, we are using the opportunity to use some fresh faces but we are looking for another win, which would level us at the top of the table with Russia and the Azzurri. We believe that we’ll have big support from the terraces and our aim is to make our loyal fans happy”.

Italy’s squad has a familiar look to it but also includes three debutants; Ariete Este’s Marco Brogiato and Lions Brescia duo Angelo Baruffi and Andrea Gazzoli. They are looking for a third straight win in the competition which would see them unbeaten at this level for two years.

Italy head coach Paul Broadbent commented: “It’s good to be getting back into international action again after two great efforts already this year against Ukraine and Russia. We feel really proud to be including a trio of debutants, again showing how rugby league in Italy is growing in strength and depth year on year”.

“The staff and players should take great heart and a lot of credit for the progress being made, their efforts to grow the game have been outstanding and Saturday brings another opportunity to showcase that. Serbia are a very strong outfit with some very big, direct, strong-running forwards guided by smart playmakers to get into the right areas of the field. They play with a lot of pride and passion at home and we need to match and overcome that to be in the race”.