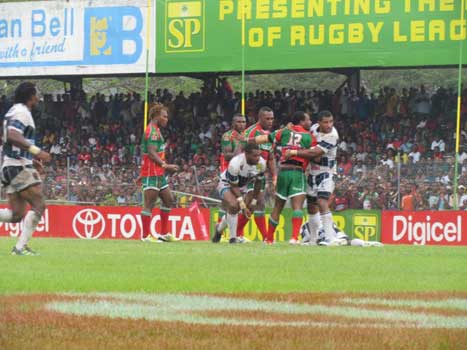 The PNGRFL have announced the PNG Kumul PM13 Squad for the clash against the Australian Kangaroos PM13 in Kokopo on October 12th.

The Squad was today signed of by the PNG Prime Minister, Hon. Peter O’Neil, before being released in line with protocol for the 10th Year anniversary of the PM13 match.

A strong inclusion into the squad Page is contracted to the Canberra Raiders and is the 2014 Intrust Super Cup Player of the Year and qualifies to play for PNG. Page will join the squad in Kokopo once visa requirements are met.

Segeyaro, Thompson, McDonald and Jayden Hodges are unavailable for selection, while Alex Johnson is also unavailable and likely to line up for Australia in the PM13 clash. David Mead and Rod Griffin are also unavailable due to both getting married in October.

Head Coach Mal Meninga expressed his confidence in the squad which was finalised in consultation with selectors and Assistant Coach & Hunters Head Coach Michael Marum;

“It was a difficult and long process trying to work through which overseas based players were available and as it is not a World Cup Year it is difficult to secure the services of overseas based players, due to eligibility guidelines, club commitments, injuries etc. Having said that we are excited about the young talent available and the pathway that has been created in PNG.

The selection focus was on combinations and youth and the best group of players playing at the highest level possible. Luke Page was a welcome addition. He is only 23, big, strong, aggressive and I know the Raiders have a big wrap on him. He is also really excited about playing so we are pleased to have him. Rhys is another who deserves a chance to show the talent he has and Wellington and Mark desperately wanted to play – this is the attitude we want.

The Hunters have had a fantastic season and have a number of young talented players who are now proven at a high level, who are fit and ready to take on what will be a star studded Australian team. There are a number of new young faces to the Kumul Squad and we have to focus on the players who will still be here and will form the basis of the Kumul’s Squad for the next World Cup in 2017. The National Selectors have also done a wonderful job with the All Star Squads. I am very excited about the young talent playing in the All-Stars match and players who stand out have a chance to be included into the Kumul squad for the test match against Tonga the next weekend in Lae.”

“I would like to thank our National Selectors, Head Coach Mal Meninga and Assistant Coach Michael Marum for a tremendous job. It’s not an easy task picking any representative team in PNG and we realize there will be plenty of comments about who should be in and who shouldn’t be in, but we have to clear the decks and concentrate on our young players and get them into the Digicel Cup, Hunters, Team Kumul then through to the NRL to be competitive on the international stage. This is serious business and important for our nation to forget the old ways of selections and realistically look at what we have to do and the big picture for the future of the game in PNG. We have to decide NOW on where we want to be, how to get there and what group of players we want for 2017.

We also need to create our own homegrown stars and provide a pathway into the NRL and with the pathway created we hope to have several players in the NRL who have come through that pathway by 2017, who are ONLY eligible to play for PNG and hungry to represent their nation. We are in a rebuilding phase and we have to start now or we wont be where we want to be in 3 years time and competitive with the top nations internationally. Local Team officials will also be invited into camp to learn from Mal and Michael during the International period. I firmly believe we are taking the right path and it’s an exciting time to be a young talented rugby league player in PNG right now.””