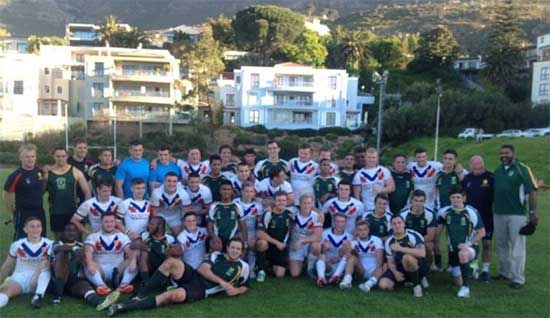 GB Lions won the toss and elected to play into the bright sunshine and receive the kick. The game started with committed collisions with intent showing from both sides. The Lions pinned the hosts in their own 20 with strong defensive pressure and two quick penalties for GB allowed them to work the ball from left to right for the outstanding Tom Hughes to score in the corner with 6 minutes gone on the clock a missed conversion took the score to 4-0.

For the next 10 minutes the match became an arm wrestle with both teams completing sets. On the 15 minute mark the Lions got into the opposition red zone and with quick hands Chris Barratt sucked in three defenders to release Lewys Weaver to score in the right corner. With the heat and altitude affecting both teams the referee called a water break on the 20 minute mark with both trainers using this opportunity to shuffle their packs. The water break had an adverse effect on the Lions and their completion rate decreased from 80% to 25% allowing the Cape to retain possession.

An opportunist try by livewire hooker Josh Dixon from a quick play the ball off Dan Parker converted by Chris Atkin took the score to 14-0. GB impressive defence again led to the Cape having to drop out and quick hands exploited the hosts’ left hand side for Billy Griffiths to score and converted by Atkin. Imposing replacement Iain Murray started to break the line at ease and his third carry led to excellent link up play for Tom Hall to score with Atkin converting making the halftime score 26-0.
The South African team talk proved productive and the Cape came out firing at the start of the second half, with several line breaks but GB scramble defence was phenomenal thwarting the plucky hosts. After soaking up the pressure GB Lions hit back with three quick tries from Weaver and a brace for captain Blake Mahovic with Atkin unsuccessful with the boot taking the score to 38-0. To their credit the Cape did not buckle and retain possession for a 5 minute period but GB defence stood strong. A clinical set from GB put Dan Parker in from a miss out pass from Atkin who converted.

Replacement full back Jordan Sheridan then recovered a lose kick from the hosts and attack with earnest tackle short of the line his quick play the ball released Mahovic for his hat trick. Taking the score to 48-0.

In the final 10 minutes the game opened up from that moment and the Lions tails were up, on the 73 minute mark, GB scored the pick of the bunch with a free flowing move which saw eight players handle to release the ever present Osian Phillips to score under the sticks with Weaver converting. GB still were not finished and a barnstorming run from Harrison Elliott from 20 metres out saw him fend off three would be tacklers to score under the posts and an audacious chip kick from Billy Griffiths to convert making the final score GB Lions 60 Western Cape 0.

The Lions were then treated to a traditional South Africa Braai(barbeque) and thanked their hosts for the superb hospitality throughout their stay in Cape Town. After visiting Table Mountain, Shark Diving and Surfing the GB Lions now move on to their second leg of the tour in Johannesburg where they take on the South African National Club Champions TUKS before they move onto the final test match against South Africa.

The Lions will take on TUKS at Groenkloof Stadium on Wednesday, 17 September 2014 at 17h30