There is a well worn phrase; a house is a man’s castle.

Question: But what happens when you have thirteen men all living under the same roof?

Answer: get a bigger Castle.

Question: But what happens when you can’t afford a bigger castle, and the entire future of your sport depends on your ability to attract crowds, sponsors and recognition?

This has long been one of the issues facing French Rugby League, as it faces a perpetual uphill battle to win the hearts and minds of any regular Frenchman under the age of 60. The lack of suitable stadia afforded to the Fédération is equalled only by a lack of exposure which together their fates are entwined.

Of course it doesn’t help your cause when a Nazi enabling Vichy Government makes off with all of your cash, grounds and able bodied players – but there have been ample opportunities to rectify this in the 7 decades that have passed ever since, one of which is even regarded as a golden era for the sport. Even as late as 1978 the French teams were knocking over the best, winning a test series against the Australian’s in their own back yard.

How Les Chanticleers will ever recover to such lofty heights is anyone’s guess. However, it is this writers’ belief that ultimate success stems from owning larger facilities. Like the French Revolution which was triggered at a Bastille, so too should the game of thirteen.

For French Rugby League, the largest fort in their Maginot Line is currently 13,000 strong, being Stade Gilbert Brutus in the northern suburbs of humid Perpignan. This year I finally got to visit the stadium that is striped in blood and gold, and was immensely impressed with the game day experience.

Having walked through the historic centre of the city, my partner and I found ourselves completely alone. Unlike the feeling you may get walking to Wembley or Leichardt, as a trickle of supporters turns into a river – we were a mere leaf drifting unnoticed on a millpond.

To our right was another stadium, the imposing Stade Aimé Giral of the other code’s USA Perpignan. Whilst it officially only holds one thousand more seats than our final destination, it seems to loom over everything – not least the small rendered flats with tiled rooves dotted with the odd soccer ball stuck in the gutters.

But then all of a sudden does Stade Gilbert Brutus appear, in what could be a world record for shortest distance between two Rugby Stadiums. Whoever it was that convinced the ‘’Conseil General Pyrenees-Orientales’’ to spill public coffers into two similar sized Rugby Stadiums located 1.2 km apart from each other certainly has immense diplomatic talent (never mind the dilapidated looking Hospital that rests in between).

As it turns out, there was a crowd there after all, about 8,000 bums on seats. To the away fans credit, to travel from Wakefield and reclaim an entire stand for Yorkshire deserves a badge of honour. There were rock singers and climbing walls, a genuine festival atmosphere. And yet, there was something about it that left me as empty as the bay I sat in after full time (see exhibit A). I was left questioning, is this really it? The pinnacle of an entire sport on the eastern side of the channel, the namesake of Super League ‘Europe’ (not M62) was over in an 80 minute flash. So where to from here?

13 more players like flying Morgan Escare or the enforcing Remi Casty would be handy, but for the purposes of this piece we are going to focus wholly on the two prospects of larger stadia coming forward in France.

The two ongoing redevelopments are those based at Stade Gilbert Brutus (Perpignan) and Stade Des Minmes (Toulouse).

Firstly back on Stade Gilbert Brutus, which has been slowly redeveloping since 2006 when it could only hold 4,000 spectators. It once only featured a single main stand, an auxiliary stand and a crescent concrete seating arrangement. However, it has been building in phases ever since with new southern and western stands erected – and with a third intended to replace the existing Tribune Guasch Laborde Stand to the north. 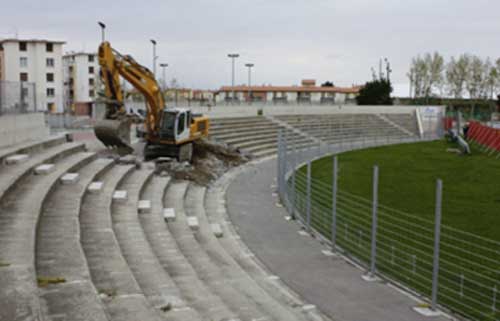 Stade Gilbert Brutus getting ripped a new one.

The final stand will bring the total capacity to 14,000, and most importantly… it will look cool. Yesterday I received a response from a spokesperson from the Catalan Dragons; who mentioned that whilst an exact date is yet to be confirmed, the intention is to commence the final phase in 2015. 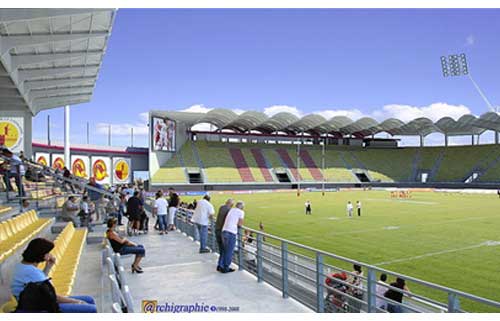 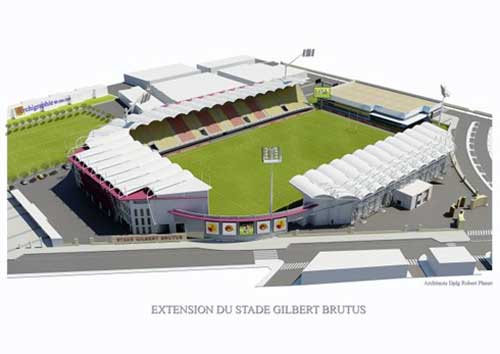 Once finished, it will retain its title as the largest purpose built Rugby League Stadium outside the Commonwealth. Surely there has to be a case for more French Internationals as a result, particularly if they can start to fill the new capacity which admittedly has proven a bridge too far as of yet. Either way, they will have to manage without 2 Catalan specialised beer cups which this writer will not be giving back.

The second stadium is of course Stade Des Minmes, or otherwise known as Stade Arnauné in the dense northern suburbs of Toulouse. As I am a Strategic Urban Planner by profession, I look at this ground and my hands literally start rubbing together. The ground is extremely sustainable, as its within spitting distance of a metro line, surrounded by shops and services amongst a consolidated supporter base. How the owners haven’t managed to sell the ground to developers is beyond me, although it may have something to do with the seasonal support from the Maire de Toulouse: Pierre COHEN – who has ever always promised to commit millions of euros towards the ground’s redevelopment.

Currently the ground holds roughly 4,ooo spectators who are divided between two aging stands. The proposed development essentially improves the existing stadia, whilst building a brand new stand behind the goal posts to the west, which would include a shop, gym and commercial space for administrative support. Once ready to go, the ground should hold 10,ooo toulousains, that is… if it ever gets off the ground. 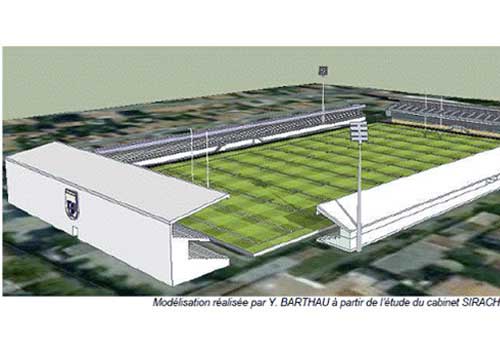 A simple websearch reveals a crumb trail of promises dating back to 2008. The most recent of which quoted that works would start in September this month. Curious, I sent an email to the City Council hoping for a No-BS answer and they shed light on a very different picture.

According to the Autorisations Urbanisme Mairie de Toulouse, all that has been approved on the site thus far is a demolition of a bungalow. And in case there was any doubt lingering in this writers mind, I was even kindly sent a copy of their approval. So once again, plugging my own profession as a Planner, I can safely estimate that without even a planning application submitted the stadium is still approximately 50 to a million years away from commencement – give or take. 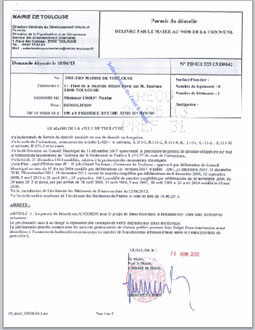 Demolition Approval for a single Bungalow at Stade Des Minmes

It’s through an umbrella of love that I feel disappointed by the lack of progression for Toulouse, who has always shown such an ambition as a club. Only through a second French team in the games European top flight can we expect the Test Team to fully recover.

Until then, Puig Aubert stands alone as a bronze statue with no equivalents, as those who remember call last drinks.

Question: How much longer will he stand alone?

Answer: In my opinion, the solution has only just begun with Stade Gilbert Brutus yet can only finish with Stade Des Minmes.