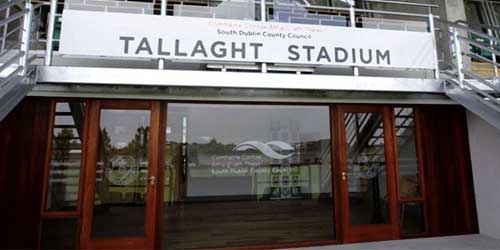 In 2014 Rugby League Ireland will take international rugby league back to Tallaght when they take part in the European Championships against France, Scotland and Wales.

In the 1990’s a rugby league development project was in full swing in the West Dublin town of Tallaght.

The result of this project has made Tallaght one of the key birth places of rugby league with the birth of the Tallaght Tigers who were in existence from 1997 until 2013.

For the first time in fourteen years two senior international games will take place on home soil with Tallaght Stadium the host of Ireland’s two home games in the Championships.

This will become the second time the South Dublin stadium will host international rugby league following the 2010 fixture between Ireland and Scotland.

France and Scotland will be the visitors in 2014 with fixtures on the 18th and 25th of October respectively.

Speaking on the announcement of these fixtures RLI Director Richard Egan said “We are delighted to be bringing rugby league back to Tallaght and in particular a facility such as Tallaght Stadium. To be able to host two games in such a high level facility is a massive boost for rugby league in the Dublin area and further afield.”

Ireland head Coach Mark Aston also reacted to the announcement of the fixtures in Tallaght “We are delighted to be coming back to Tallaght which was a key part of the development of rugby league in Ireland in its early days.”

“We had a tough World Cup last year which we knew we would have given the group we were drawn in. From that we have a good base of players to choose from for this year.”

Also taking place in the 6,000 seat multi-purpose stadium will be Ireland’s first ever under 19’s fixture when Ireland takes on Scotland on the 25th of October.

Details on how to purchase tickets will be released shortly with prices set at €5 per game.