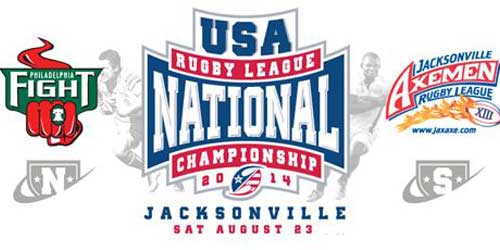 There was a massive media build up during the week in Jacksonville a town based in the USA in the lead-up to the game you would usually see played in Australia or England. That game being Rugby League!

After 8 weeks of regular competition and another 2 weeks of play-off footy the USARL National Championship climaxed over the weekend.

In what was a great advertisement for rugby league in the USA, a large vocal crowd was on hand at the University of North Florida in Jacksonville to see the top two USARL teams Philadelphia Fight and Jacksonville Axemen go head to head for the National Championship Cup.

The game was played in quarters partly to deal with the American summer but also to provide some similarity for the locals with American Football. With the Philadelphia Fight leading Jacksonville Axemen 18-12 at the end of the 3rd Quarter you could say it was anyone’s game going into the final 20 minutes.

But as they say in the classics it wasn’t to be as the Philadelphia Fight stayed the course in the final quarter and made it back to back National Championships defeating the Jacksonville Axemen with a full time score of 30 – 18.

In what has been a great year for the Philadelphia Fight, by winning the Final they remain undefeated for 2014 winning 10 from 10 matches. The Championship win also means the Fight have now won 3 out of the last 4 Championships which is a great feat within itself.

With the USARL expected to be ratified by the Rugby League International Federation shortly you could say that in 2014 rugby league is on a roll in the US of A.