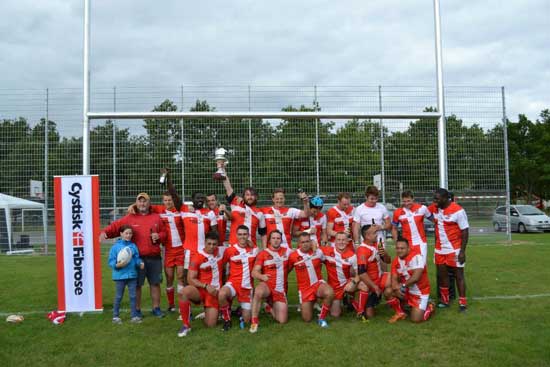 Denmark have won the 2014 Nordic Cup with a convincing win over Sweden in Copenhagen.

The Danish steamrolled Sweden with the final score of 44 – 6 indicating it was mainly one way traffic for the 80 minutes.

Sweden had 9 players on debut for the game which was always going to stack the odds against them. Especially against a battle hardened Danish outfit who had already defeated Norway 16 – 10 three weeks ago in the opening game of the Nordic Cup.

Sweden will now regroup and look towards their last match of the series against Norway in two weeks in Lund. Norway will be favourites going into this match and Sweden will be hoping for a much closer contest.

A comprehensive 44-6 success over holders Sweden in Copenhagen last weekend, building on earlier victory against Norway in Oslo, saw Denmark pick up the 2014 Nordic Cup, becoming the first of the Scandinavian nations to hold it twice having won the inaugural tournament in 2011.

Try doubles from centre pairing Emil Borggren and Martin Pedersen-Scott laid the platform against the Swedes, leading Steve Davy, president of the Dansk Rugby League Forbund, to comment: “Sweden and Denmark both contributed to the highest quality rugby league game I have ever seen in Scandinavia.”

“The intensity and focus in the run up to it was evident and seen in the determination and teamwork on the day.”

He continued: “It was a great day for Danish rugby league especially as there are more born and bred Danes making the team.”

Danish coach Nigel Kitching, formerly with London Skolars and Avignon added: “We went for a balance of youth and experience in what was the strongest Danish team we have fielded. Every one of the lads played with discipline and enthusiasm, which I hope we can carry forward.”

Three of Denmark’s starting 13 were teenagers, Borggren, Jesper Ika and try-scoring winger Christoffer Ellebirke. “It is really pleasing to see youth not just coming through but succeeding at international level,” said Kitching.

Man of the match Borggren commented: “It was a great experience representing my country in one of the finest sports. Our overall strength, speed, and skill is what led us to be successful earning the Nordic Cup. I’m very proud to be a part of this team and hope to watch rugby league excel in Denmark as a sport.”

Sweden coach Ash Brown acknowledged: “It was a brutal match that let the best of Danish rugby league shine.”

“We lost the soul of our side, Paul Briggs, in the first tackle of the match due to a heavy collision and the tone of the game was set from there.”

“The massive Danish forward pack laid the groundwork for some slick moves from the halves and outside backs. Our young side showed plenty of heart but was out gunned.”

Hooker Richard Groom opened the scoring for the hosts with a try and goal and Denmark were soon celebrating again when a precision kick from stand-off Justin Eyles was collected by Ellebirke in the corner of the in-goal area to make it 10-0.

Sweden hit back at the end of the first quarter, skipper Fabian Wikander – their best performer – going over and converting his own try.

Silas Mubanda’s explosive running was rewarded with the last try of the first half, Denmark going in to the break 22-6 ahead.

Borggren then took centre stage, twice going over on the right and Pedersen-Scott also picked up his brace with an excellent individual run that took him past several tacklers to the posts.

Neil Smith claimed the Danes eighth try, a worthy reward for all his hard work, Groom landing his sixth goal

Sweden now go on to their home fixture against Norway to establish second and third place.