This is a major setback for Rugby League in Russia. Over the last few years the Russian Rugby League has been trying to have rugby league recognised by the Russian Ministry of Sport so it could obtain funding to keep the code running in Russia.

This latest development throws their participation in the Rugby League European Championship into turmoil. Russia are due to play Italy on the 26th of this month.

The UK Parliamentary Rugby League Group are currently looking into this latest development in Russia.

Rugby League Planet will pass on updates on the situation as they come to hand.

Below is the original letter of the Russian Ministry of Sport. 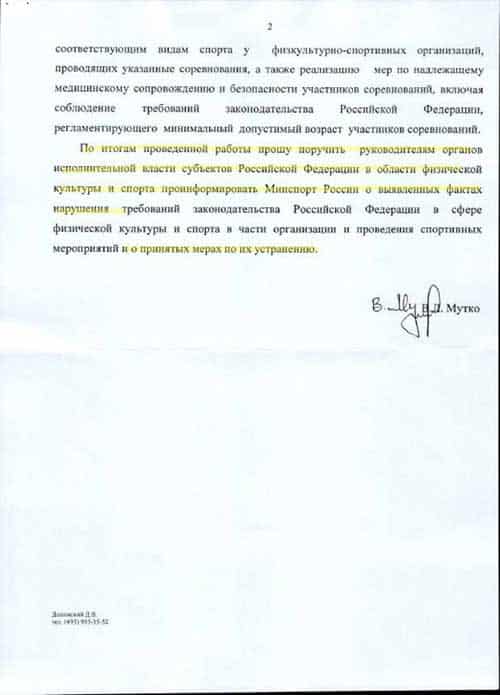 TO HEADS OF HIGHER EXECUTIVE BODIES OF STATE POWER OF SUBJECTS OF RUSSIAN FEDERATION
(COPY: ADMINISTRATION OF MOSCOW OBLAST/REGION)

In particular, by types of competitive activities which are unrecognized sports in Russia and not included in the register of sports, and also with violations of safety requirements

Besides the competition organizer is not providing necessary medical monitoring and timely medical care to competitors thereby increasing the risks associated with the threat of life and health of athletes and increased injuries.

Including the need to provide verification of the presence of sports in which the competition is held in all-Russia register of sports, presence of state accreditation on corresponding sports in athletic sports organizations conducting these competitions and the implementation of measures for the proper medical support and safety of the competitors including compliance with the legislation of the Russian Federation regulating the minimum age for competitors.

This led to ask heads of executive authorities of subjects of the Russian Federation in the field of physical culture and sports to inform the Ministry of Sports of Russia on revealed violations of the requirements of the legislation of the Russian Federation in the sphere of physical culture and sports regarding the organization of sporting events and the measures taken to address them.
Vitaly Mutko (signed)