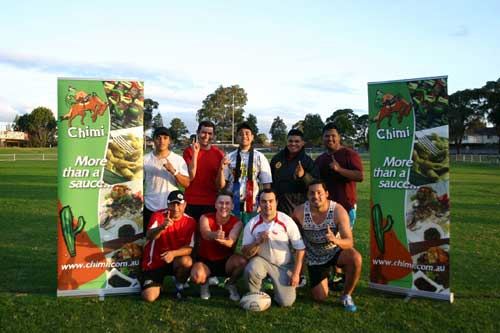 A THREE-try performance for Chile in the final of the inaugural Chimi Copa de Rugby XIII has seen winger Mayer Flamenco receive a late call-up for Sunday’s international rugby league clash between Latin America and Thailand.

With just 24 hours to kick-off in the GYG Latin Heat v Thailand Stars clash at Windsor, Flamenco ran riot as Chile scored a historic 28-8 win over composite side the Sun Gods.

It was fitting that the two sides should meet in the decider of the first all-Latino competition played under rugby league rules, having staged a tense 12-8 match in the opening game of qualification.

The Chimi Copa in Sydney saw more than 40 players of Latin American heritage converge for a hybrid version of the game, played under full league rules, but with seven-per-side and belt tags instead of tackles.

Ultimately though it was a star turn from Chile’s Flamenco and his inside man Sebastian Delapaz (two tries) that saw Chile dominate the final.
After a round robin where no more than four tries separate any of the teams in pool games, Chile pounced in the decider to lead 20-0 at the break, before the Sun Gods saved face.

For Flamenco it was perfect timing, with GYG Latin Heat head coach Ernie Tobar playing alongside and seeking a replacement for Sunday’s Thailand game after a late knee injury to Kristof Vieira.

A true melting pot of cultures, Flamenco was born in Chile to Panamanian and El Salvadorian parents, and also has a grandparent from Israel.

Testament to the competitiveness of the Chimi Copa was that a team dubbed the ‘Gringos’ – comprised of Australian and English supporters of Latino rugby league – failed to win a match.

Aside from Flamenco, Latin America has added another two players – Daniel Navarro and William Climpson – to their team to face Thailand at Windsor at 1pm Sunday.