FOR Wollongong’s Jye Sommers, becoming co-captain of a Latin American rugby league team has been a strange ride.

It’s been one of surprises, of a newfound passion, and more than anything, a journey of self-discovery.

With such an Anglicised name, Sommers will no doubt be in the crosshairs of the usual sceptics and international league naysayers when his side takes on Thailand at Windsor on June 1.

Certainly, he’s not as readily classified as teammates with surnames like Gonzalez, Garcia or Lopez.
And you know what?

Up until recently the 33-year-old would have stood among the critics, wondering who this Aussie fella was, pretending to somehow care about Latin America.

Jye grew up thinking his olive skin came solely from a part-Aboriginal background.

He even played in an indigenous carnival under that belief, citing a maternal bloodline that stretches back seven generations in Australia.

“Then it emerged that my father’s side is from Peru. It was a bit of a family secret,” says the forthright Sommers.

“My grandfather, Ralph Ortega, took off when Nan told him she was pregnant. There was some embarrassment about that.

“Dad thought he was never wanted. He was with my Mum for more than 20 years before he even told her.

“It all took a while to surface, but I am – and will always be – very proud of my father.”

As such, Jye’s involvement with the GYG Latin Heat rugby league side has been a story not only about himself, but also about his wider family.

It’s been one of finding peace, acceptance and ultimately, of rejoicing in a proud culture.

Indeed, Jye’s parents were some of the first spectators to take a position on the sidelines for the Cabramatta Nines in January, cheering loudly as the Latinos scored their first-ever win against Japan.

“These days my father thrives on his South American background and I know he regrets not following it up sooner,” reveals Jye.

“It’s a bit of a tough story, because when Dad finally decided after all those years to go looking for his own father, he found he had died in Queensland not many years beforehand.”

What the family was able to ascertain was that Ralph Ortega had been raised close to the Peruvian capital of Lima, home to Inca warriors as recently as 500 years ago.

Ralph grew up in the portside district of Callao, a derivative of the word for ‘pebbles’, which line the eastern Pacific shore.

Earthquakes and tsunamis torment the peninsula, with 510 killed as recently as 2007 and more than 17,000 people displaced.

All this history – and the fact star Peruvian footballer Claudio Pizarro grew up in the same neighbourhood – would have been lost on Jye just a few years ago.

“The Latin Heat team is the first real way I’ve found an avenue to associate with other Latinos,” says Sommers.

“To be honest, I’m loving it. To be one of only two Peruvians involved in the team and to have represented the side as captain is a great source of pride.

“After the Cabramatta Nines, where all the boys were singing and laughing in that Latino spirit, the whole family walked away feeling so glad to be involved.

“This team is achieving more than just spreading rugby league.”

A father to four boys of his own, Sommers was originally added to the GYG Latin Heat squad after emailing team officials to see if he could buy a Heat jersey.

When he inadvertently let slip that he was captain-coach for Corrimal Cougars third grade, it was felt his experience and steadying hand could assist many of the novices in the Heat side.

But in a handful of performances to date, Sommers has shown far more value than that, covering numerous positions and leading the way in line breaks and tries.

Formed to give the 600 million people of South and Central America representation in international rugby league, the GYG Latin Heat caters to those with heritage in the following nations:

Upcoming Events:
• Copa de Rugby XIII, Saturday May 31, Norford Park, Sefton, Sydney – The first all-Latino rugby league tournament played between the individual nations of South and Central America. This inaugural event will be played on a non-contact ‘tag’ basis to maximise participation and is open to all levels of abilities, ages and genders.

• ‘Rumble in the Jungle’ versus Thailand Stars, Sunday June 1, Windsor Sports Complex, West Sydney – The latest event on the international rugby league calendar pits two emerging sides head-to-head. Both teams have beaten Japan and both teams have lost to Asia Cup champions the Philippines, so it should be a close one! 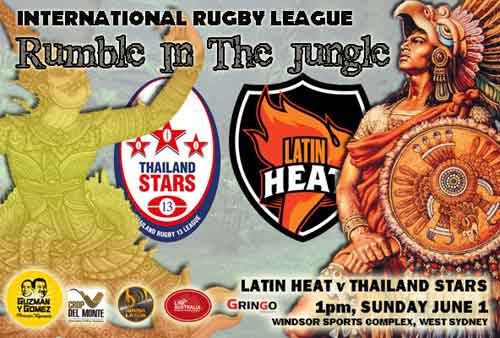