The third round of the CZRLA 1st Division Championship saw the previously undefeated Teplice Dragons being comprehensively outplayed by Slavia Hradec Kralove, a cliffhanger win for the Vrchlabi Mad Squirrels at home against Orli Havlickuv Brod, and an even closer result for two Czech teams wearing the familiar kit of a couple of clubs with a hundred year plus rivalry on the other side of the world.

The historic first clash between the two Czech rugby league club’s affiliated to NRL powerhouses and traditional rivals, the Sydney Roosters & the South Sydney Rabbitohs, ended in an 18-all draw. The Mikulov Roosters – whose founder & player-coach, Petr Sedina, recently returned from a trip to Australia in which he was a guest of the reigning NRL premiers & World Club Champions, and was presented with a full Roosters kit – hosted the Czech Rabbitohs in a match that was tight throughout.

Both teams went into the game with one win each in the Czech 1st Division Championship, as well as a loss, the latter against the Teplice Dragons in both cases. The Rabbitohs slight favouritism on the back of having broken Lokomotiva Beroun’s 2 year undefeated winning streak in the opening game of the season was balanced by the fact that the game required them to make a lengthy roadtrip. Each of the teams played impressive rugby league in patches – Beroun-based match official, Pavel Mejstrik, making a confident 1st Division refereeing debut and allowing the game to flow freely – with the core of experienced Roosters leading the way in establishing a 6-0 half-time lead through a converted try to Pavel Zemanek, before falling behind 8-18 midway through the second half, after impressive individual try-scoring efforts from three of the Rabbitoh’s Chrudim young-guns, Marek Pluhar, Vita Caslavka & Matej Pecina. The Rabbitohs inexperience though, left them unable to withstand Mikulov’s grinding last quarter comeback which resulted in Czech national team veterans, Sedina and Zemanek, using their nouse to each score tries which tied the game up and resulted in what was a fitting result for all concerned. 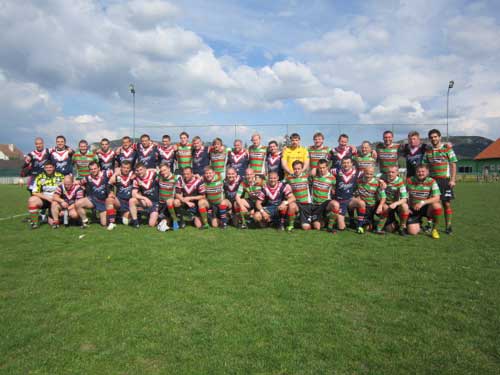 In the second match of the round, the Vrchlabi Mad Squirrels hosted Orli Havlickuv Brod in a game that was also in the balance until the final stages. The decisive moment proved to be a barreling 76th minute try from Man-of-the-Match, Marcel Novak. Until that point, the Mad Squirrels had been clinging to a 14-12 lead on the back of one successful try conversion from Adam Bjelka being the difference between the three tries apiece scored, all in the second period after the first half had finished 0-0.

The final match-up of the round, which saw Slavia Hradec Kralove host the previously undefeated Teplice Dragons, was a classic case of contrasting styles of rugby league. The Dragons had established their early leadership of the CZRLA 1st Division Championship on the back of blasting through opposition defences courtesy of a big, mobile forward pack interchanging regularly to build momentum, and enthusiastic back-up from their support players. Slavia Hradec Kralove, conversely, with a young team lacking any great size, rely on every player in their squad having mastered the basics of the game and all making strong contributions across the park.

Both teams went into the game without key players, but it was the Dragons who looked to suffer much more in this area, appearing rudderless for much of the game, and increasingly so as the game wore on, and their attempts to smash through the Hradec defensive line were generally met with tenacious tackling which was not necessarily spectacular, but almost always effective. As the Dragons struggled to physically overpower the superbly drilled home team, they became increasingly frustrated and their subsequent loss of patience resulted in a lack of direction, poor passing options and an array of dropped balls and knock-ons, which cruelled any chances they had of asserting themselves in attack in the manner they had done so successfully in their earlier games this season.

Hradec, conversely, stuck to a methodical game plan based around the deft organization of their half/hooker combination – Ladislav Cintler and Tomas Douda – playing out their sets with direct running and short, accurate passes, quick play-the-balls, respect for possession and sensible tactical kicking. As the game advanced into the second half, what had been a tight 10-8 halftime scoreline blew out, as Hradec Kralove capitalised on the momentum they had gained by an increasing advantage in possession and a well-earned dominance in field position, so that the final score was 34-12, much to the delight of an enthusiastic, & very vocal, local crowd.