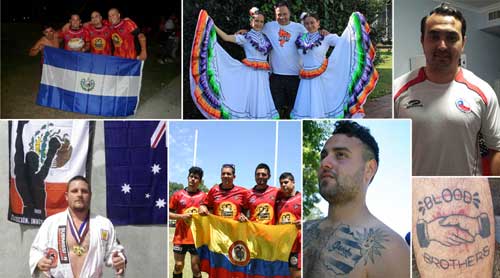 CHILE looks set to start a surprising favourite for the first all-Latino rugby league tournament, the Copa de Rugby XIII, to be held in Sydney on May 31st.

It is to be held on the same week that the ‘Latin America Down Under’ conference is hosted in Sydney, a drawcard for Latino diplomats and commerce leaders.

The first staging of the Copa de Rugby XIII will be held under non-contact ‘tag’ laws to allow participation from all backgrounds of experience, age and gender.

And while Argentina dominates Latin America in rugby union – currently ranked ninth in the world – the talent spread in Rugby League is far more even.

Indeed Chile, Colombia, Uruguay and El Salvador all look to have potential squads to threaten traditional Latino powerhouses Argentina and Brazil for this inaugural competition.

GYG Latin Heat coach Ernie Tobar, who will steer a 17-man team in a full-blooded international versus Thailand at Windsor the following day, is also a chance of pulling on the strip of Chile.

Colombia has been another forerunner in the growth of Latino Rugby League and will feature a number of rugby union converts such as Medellin natives Juan David Espinal and Sebastian Maya Jimenez, along with Bogota’s Diego Vejerano.

Featured on SBS Radio and TV several times this year, charismatic winger Fernando Villegas will also be representing Colombia and doing his best to promote the game.

Though thinner on numbers, Uruguay has some undoubted talent with Group 6 forward Josh Gadea-Hellyer and Sydney University’s Andres Rossini at hand.

El Salvador could be the real surprise packet, with the tiny Central American country having great depth and experience.

Due to a civil war from 1979-1992, many Salvadorans sought refuge in Australia, giving them a solid upbringing in the sport of Rugby League.

A team for ‘Gringos’ – non-Latinos wishing to support the growth of the game in Latin America – will participate on the day but not be eligible for finals.

Travel and accommodation for out-of-town players is via private arrangement.

• Copa de Rugby XIII, Saturday May 31st, Norford Park, Sefton, Sydney – The first all-Latino rugby league tournament played between the individual nations of South and Central America. This inaugural event will be played on a non-contact ‘tag’ basis to maximise participation and is open to all levels of abilities, ages and genders.

• ‘Rumble in the Jungle’ versus Thailand Stars, Sunday June 1st, Windsor Sports Complex, West Sydney – The latest event on the international rugby league calendar pits two emerging sides head-to-head. Both teams have beaten Japan and both teams have lost to Asia Cup champions the Philippines, so it should be a close one!