Toa Samoa have broken their Fiji Bati hoodoo in front of 9,663 passionate fans at Penrith Stadium to secure a place in the end of year Rugby League Four Nations.

The call cry from the crowd every time players ran up the ball was aaaaaaaarrrrrrhhhhhh boom! Both sides put on a number of big hits for the fans throughout the game which created a sensational atmosphere at the game.

The first half was a tit for tat affair with Samoa crossing over first via Manumaleali’i. Fiji hit back via Naiqama and then Fiji put on two further tries via Storer and Tuqiri to put Fiji ahead 16 – 6. Just before half time Manumaleali’i crossed over for Samoa to bring them back into the game 16 – 12.

In the second half Fiji started to lose their cool with drop balls and ill-discipline. It didn’t take long for Samoa to snatch the lead when Manumaleali’i crossed for his 3rd try and the smiling Inu putting the ball over the black dot once again. Samoa crossed again via Tuimavave and Vidot securing the Samoan’s win 32 – 16 and their place in the Four Nations.

Toa Samoa’s Four Nations berth will see them open the Tournament against England at Suncorp Stadium in a double header in Queensland. The following week they will then take on New Zealand in Whangarei. Their last game (unless the make the final of course) will see them take on World Champions Australia at WIN Stadium in Wollongong. 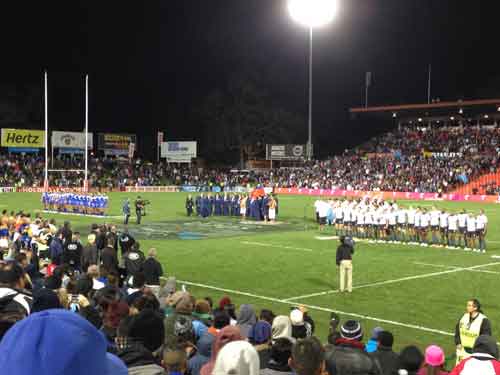 The 2014 Four Nations schedule in full is as follows: