2014 Four-Nations Snapshot – The 2014 Four-Nations is the 4th instalment of the highly successful rugby league competition. With the ongoing improvement of 2nd tier nations, and the 2013 Rugby League World Cup being hosted in the UK. The Four-Nations took take place in Australia and New Zealand in October / November 2014 with the Final being held in Wellington, New Zealand.

The Four Nations tournament has seen France, Papua New Guinea and Wales all take part against the big three since its inception. There has been many mixed messages from the RLIF in the lead up to the 2013 RLWC about who would be the 4th team. It was originally going to be a play-off between the top to finishing Pacific nations in the RLWC. Then it was changed to the highest finishing nation. With Australia racking up a big scoreline against Fiji in the 2013 World Cup Semi final it seems that there has been a back flip of sorts with a play-off between the top two finishing Pacific nations Samoa and Fiji taking place to secure a Four Nations place.

The play-off match between Fiji and Samoa for a place in the 2014 Four Nations took place on the 3rd of May at Penrith Stadium. Samoa ran away with the game in the 2nd half of the test defeating Fiji 32 – 16 and securing their Four Nations berth.  Click here for more info on the Samoa v Fiji International

In April 2013 on the back of announcing broadcasting arrangements for the 2013 RLWC the BBC were confirmed as UK broadcasting partners for the 2014 Rugby League Four Nations. Broadcasting Partners in Australia are Channel 9 and GEM.

Week 1: Kicking off with a double header at Suncorp Stadium in Brisbane in front of 47,813 Fans, The Four Nations opened with a bang. In a cracker of a game Samoa ran England to within 6 points. England just held on to win 32 – 26. The second match saw a major upset with New Zealand’s forwards dominating the Australian’s. The full time score was a shock to the rugby league community, Australia 12 – New Zealand 30. The opening week of the Four Nations has set the series up to be won of the most interesting in the tournaments history.

Week 2: Samoa travelled to Whangarei to take on New Zealand in front of 16,912 fans which was a record for Test match between the two nations. Toa nearly caused a major upset and it took some questionable calls and a bit of luck to see New Zealand score close to full time to record a narrow victory over Samoa 14 – 12.

The Australia v England match a day later was full of controversy. England had Australia on the rack at half time leading 12 – 4. The battle continued in the 2nd half with Australia clawing their way back to take the lead late in the game. With a minute to go England seemed to have scored the winning try when Hall went over. After many video replays the try was denied, England going down to the Australians 16 – 12 in front of 20,585 fans.

Week 3: New Zealand and England had another classic international battle to kick-off week 3 of the 4 Nations competition. In front of 15,836 fans in Dunedin the Kiwis just held on 16 – 14. The Kiwis finishing top of the Four Nations table also booked their place in the Four Nations Final.

Australia simultaneously dumped England and Samoa out of the tournament, regerstering a 44 – 18 win against the Samoans, and setting up the final clash with New Zealand and breaking the hearts of Samoan and English rugby league fans across the globe.

The result was certainly no upset, with Samoa going into this encounter without a win, however going into the game both had a chance of progressing going into the final, making for a tense encounter. Australia will go into Saturday’s final as marginal favourites, despite getting walloped by New Zealand in the opening week.

The Final was a classic with Shaun Johnson putting in a man of the match performance assisting the Kwis to win the Four Nations tournament for the 2nd time. With the Kangaroos being denied a try in the dying minutes, the Kiwis held on to win 22 – 18.

With the closness of the 4 teams, great crowds and great footy the 2014 Four Nations is the most successful Four Nations tournament staged to date. 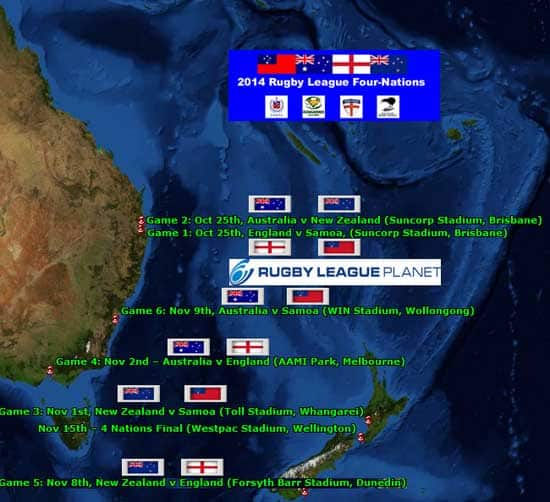