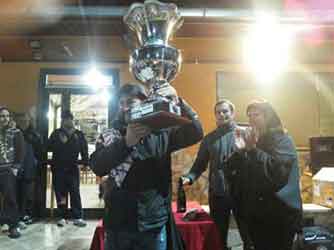 Last Saturday, the first trophy of the 2014 season was awarded to USAG Lazio at stadio Avezzano with the capital team having the better of Spartans Sicilia and the Becker League di Piece a Nievole (in Tuscany), newly affiliated to the FIRFL.

“We are happy to have won the title a beautiful day (again) from last year – says Riccardo Marini, coach of USAG Lazio – and we are content to have lived a beautiful day teaching rugby league in the beautiful setting of Avezzano.”

The Roman team captained by Brizi in their first battle had beaten Spartans 22-6 then, after the Sicilians team success over Becker League 32-8, the Romans had the best of the Tuscans winning 30-4.

“The first match was equally balanced, with a break between us and the Spartans – Marini continues to recount – then together started our work and we played our match. The game with Becker, began with an opposition try before our comeback. We are happy with the success and performance of some new elements within our group. Honour, however, goes to both the Sicilians and Tuscans for the competitiveness they demonstrated in this event.”

Thus, closes the beautiful Coppa Italia edition, now another important event for the FIRFL will soon open: Wednesday the Italian National Rugby League depart for Kenya to play the international test match against the African selection on Friday at Watamu.

“It will be a beautiful experience – says Marini, who will be part of the Azzurri stadd in Africa – not only for sport, but also social endeavours because we’ll visit the Watamu orphanages. With regard to the technical aspect, we are convinced we can make a good figure.” The following is the Azzurri Squad: Concetto D’Aquila, Camel El Gassaoue, Federico Re, Alfio Finocchiaro, Attilio Bonnici, Gabrio Maionchi, Matteo Fiaschi, Gianluca Genua, Simone Bianco, Alessandro Ippoliti, Cristiano Lavini, Carlo Donadio, Matteo Lombardi, Giacomo Franzoni, Fabrizio Massafra, David Zonta and Riccardo Staccone.