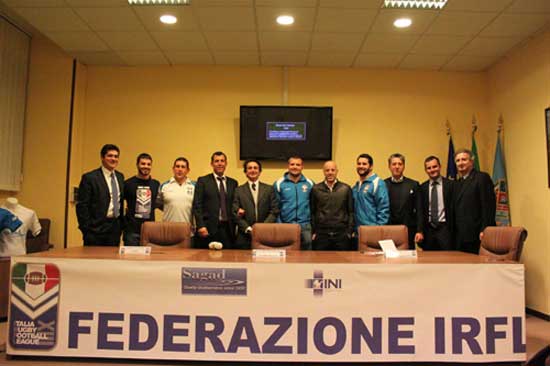 The Federazione Italiana Rugby Football League (Firfl) season was officially presented at a press conference at the Confapi Lazio in via Santa Croce in Gerusalemme in Rome on Wednesday 12 February, even infront of some well known journalists and media, including te major sports paper Gazzetta Dello Sport.

Presented was the highest summits of the Rugby League Federation by David Massitti who did the honors of the house taking the microphone and underlining the tangible growth for the numbers of the Federleague movement. “We have increased the number of clubs from 57 to 70 over the entire national territory, moving from 2000 to 2700 subscribers.

We have also arranged a first level coaches course which will “produce” around 60 technicians and providing for new appointments in the coming days. As regards to the Championship, the technical level is always improving to a better quality and also for our medical facility, formed by professionals of the highest thickness.”
Massitti then announced that the new legal office of the FIRFL will be hosted in the Palace of Confapi in the centre of Rome and the federal structure foresees the presence of Vice-President Gigi Ferraro, the Secretary-General Pierluigi Gentile and Magrì, Nicotra, Moncada and Marini of the council. “I want to underline with force – added Massitti- a founding principle of our Federation: is the care of the social aspect, as shown by the numerous projects that we have started (between the Charity Camp in Kenya) or the presence of the team of the Frosinone prison (bisonti) in our Championship.

” The social aspect is also key for the General Secretary Pierluigi Gentile he said during his speech. Our national team in (late) March will be in Kenya for a test match at Watamu. On that occasion our project “Charity Camp” will be re-launched that we will bring forward in the next few years and that has as its purpose to teach and instill the values of rugby league to children of orphanages and especially to help them in their everyday practice. The same Azzurri players, in these days within the permanence of the African State, will visit these orphanages.

The national team also will play another international test match in Florence in July and a thick figure like Gareth Haterley-Hurford of Saracens will take part wthin the coaching staff headed by head coach Tyron Sterry. This bears testimony to our desire to invest in technical growth of the Azzurri and, more generally, of our movement, we would like to emphasise this, preparatoration and never wants to be at odds with the discipline of rugby a 15 .

Gentile then annotated the first official event of the 2014 season is the National Final Four of the Coppa Italia that will take place on March 15 and 16 at Avezzano and then the traditional season in June and July with subdivision of groups between North, Central and South Italy. Present at the Conference, Italian captain Giacomo Franzoni who said he was “honored and happy of the role that I am entrusted. I will try to give my best with all my comrades in appointments that await the Italy rugby a 13.”