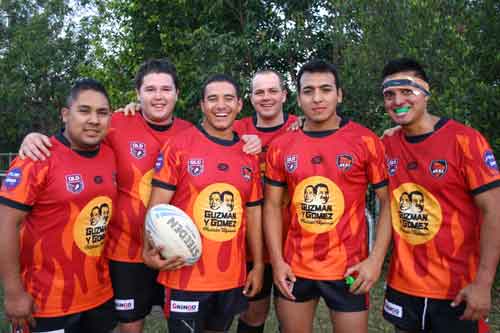 Having never played rugby league before the weekend, Colombian winger Villegas (a resident of Annerley) dived full stretch for a rolling ball on fulltime as the Heat debutants trailed hosts Wests Mitchelton 18-14.

Unfortunately the ball narrowly beat Villegas dead-in-goal, the second time in the space of minutes, denying the Latin American team a place in the Cup final and the chance of a cash bonus.

While rugby league’s newest international side went through qualifying without a win, the Heat’s spirited finish won admirers among seasoned supporters.

“I had plenty of people comment after the game how impressed they were with the courage and skills shown by the Latino guys,” Heat coach Rob Burgin said.

“We had numerous men playing for the first time in their lives or first time in years and, over the course of four games, you could see rapid improvement from them.

“Just as importantly, the players derived great enjoyment from the tournament and I feel our spectators added significant atmosphere to the day.

“We had approaches over the day from other international sides interested in playing us and players interested in joining us, so that’s a success in my books.”

Dayboro ended the nines tournament as eventual champions after accounting for Aspley 28-20 in the Trophy final, the Cowboys and Devils taking home $2500 between them.

Latin Heat sponsors Rumba Latina also generously chipped in, giving players from both sides a $50 voucher for their efforts.

In the Cup final it was an all-Panther affair with Mitchelton Twos springing an upset against Mitchelton Ones for the consolation prize.

Earlier in the day the Latin Heat debuted with a 30-16 loss to Mitchelton Twos, after trailing just 16-12 at halftime.

Hooker Josh Gadea-Hellyer, a Uruguayan who drove 1000km from Sydney to honour his heritage, deservedly became the first Latino player to score a try in Heat colours.

Subsequent losses to University of Queensland (36-10) and Aspley (30-6) looked comprehensive on paper, but both were willing contests until the final minutes.

In the 24 hours leading into the tournament, the Heat suffered the late withdrawal of its three professional players – Kevin McKenzie, Ben Vengoa and Brenden Vengoa – through a combination of sickness and family commitments.

This, combined with the withdrawal of five other squad members in the final week, meant it was a feat alone for the Heat to take the park.

“Absolute respect to the guys we called in at the last minute and those who travelled from far and wide,” said coach Burgin.

“When we woke on game day to news of the guys pulling out, it was a pretty sombre mood and there were some hasty phone calls.

“In the end we had some Australian friends who jumped in and filled a few spots and perhaps that worked for the best, because we’re all about integration and mutual appreciation of Latino and Aussie culture.

“I must say that the guys that filled in for us seemed to have a ball too.”

Beyond that the Heat will be training regularly in preparation for proposed matches against the Philippines and Thailand in January and the prestigious Cabramatta Nines in February.