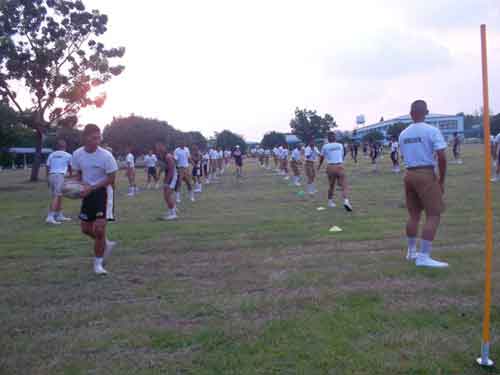 With the children of San Narciso commencing their training a month ago on the 25th of May, San Narciso, a coastal town in the province of Zambales, Philippines is beginning to look like the birth place of Rugby League in the Philippines!

Even though the first Rugby League game was played by the Merchant Marines of the Maritime Academy of Asia and the Pacific (MAAP) in Mariveles, Bataan last April 14, 2012, the â€œGreatest Game of Allâ€ was played by the Rugby Union cadets of the academy and its graduates the Philippine and Alumni Warriors respectively. Both codes of Rugby are being played at MAAP.

In San Narciso we have both local children and cadets at PMMA registered into the Philippines first junior and senior Rugby League only playing teams!

Tom Simpson and David Perry met with PMMA President, Admiral Richard U Ritual last March, where he agreed to allow Rugby League coaching to commence at the Academy in June. Last week on the 16th of June Tom Simpson, Harold Aguilo and Edmond Brocoy held a Rugby League information session for the cadets. The next day on the 17th of June, 300 cadets turned up to register to try out the â€œGreatest Game of Allâ€.

With so many PMMA cadets registering, four coaching sessions a week has been organized by Tom at the Academy with 90 cadets turning up to the first coaching session on the 25th of June.

With both a junior and senior team being established in San Narciso, the PNRL have started to lay the foundations for Rugby League to develop and expand in the Philippines.

With PMMA being the premier Philippines Government Merchant Marine education institution and MAAP being one of the countryâ€™s equivalent, private leading academies. The PNRL are eagerly waiting the day when both institutions play their first game of Rugby League against each other and establish a Rugby League tradition between them as famous as the Oxford versus Cambridge derbies.

The PNRL board members living in the Philippines like Tom and David have been doing their Rugby League development work as volunteers, with no financial support. The PNRL is eager to find financial support to continue their work. So any enquiries and offers of support can be directed to the contact details that is located on the PNRL website www.pnrlf.com