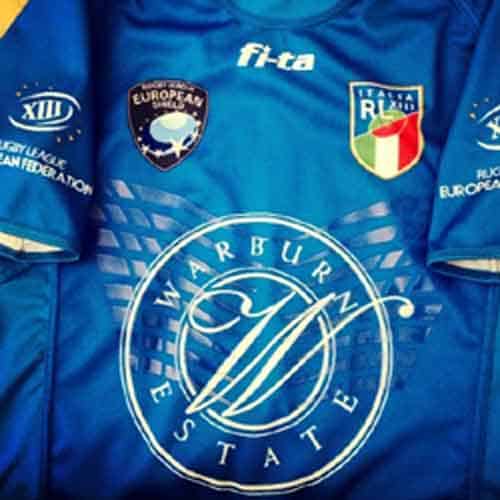 The Riverina (Australia) based wine company Warburn Estate will be the official sleeve sponsor for Italy’s first ever tilt at the Rugby League World Cup in Wales and England in October. Warburn Estate have supported the FIRL (Federation Italian Rugby League) throughout the qualifying period of the past two years and will continue through the World Cup campaign. Managing Director of Warburn Estate wines, Mr. Joe Sergi said his company was proud to be associated with the historic challenge by the FIRL side.

“They have adopted a professional approach and been a loyal and supportive organization to deal with.

“The side and its key players have been constant visitors to the Riverina district in the past 18 months. There is a big Italian population in the district and they have adopted the side to be captained by Anthony Minichiello. They will go as a well prepared side and we are proud to join them in their journey,” Mr.Sergi said.
The FIRL squad for the World Cup will be headed up by 19 National Rugby League (Australia) and Super League (England) players.

It will be Italy’s strongest side to ever take the field.

Sydney Roosters captain Anthony Minichiello said the countdown to the World Cup was now on in earnest.

“We are halfway through the NRL competition and be into the finals before we know it. Straight after that we will be off to Italy for one week prior to playing in a warm up in England before our opening Cup clash with Wales in Cardiff. The fact the bulk of our team will come from the toughest competition in the world in our game will have us well prepared.

“I am in constant touch with the players and they simply can’t wait to play for their country,” Minichiello said.
While the bulk of the side will be from the Australian based NRL there will be several spots open for Italian based players from the FIRL (Federation Italian Rugby League).

FIRL Board representative Reno Santaguida said: “There is some confusion in Europe as to which organisation is behind the World Cup challenge. It should be made clear that FIRL is the body recognised by the World Cup and International Rugby League. However, we believe there is an opportunity to work with FIRFL to enable Italy to have the best challenge. Firl will be soon competing in the European Shield in July against Russia,Serbia and Germany. Players competing in the French, English and Italian competitions will make up the side.We wish them

well and we will moniter their efforts in an opportunity to give a pathway to the World Cup for players our selectors feel can benefit the squad,” Mr.Santaguida said.