Italy to play Rest of the World in Southern Italy

The international will be played at Stadio campo da Rugby Dan Giorgio in Palmi, Reggio Calabria right near the beach in Southern Italy bordering the Island of Sicily on May 25 at 5.30pm. On 3 May, the Palmi town council; deputy-mayor Giuseppe Mattiani , councillor Antonio Papalia and council Vice-President Carmelo Ciappina with FIRFL delegate Rocco Filippone met to present the International Test-match proposal to select local media.

Palmi Mayor Giovanni Barone stated “I welcome the proposal of the Federazione Italiana Rugby Football League for Palmi and a reality that this sport has given more,â€ elaborating about the value of the proposal showcasing the city to national and even international fans together with a new sport. Deputy Mayor Giuseppe Mattiani pointed out that “the importance of the test match which will take place on 25 May will open once the city to a top international Rugby tradition. The acceptance of the proposal will be established with only benefits (for us) without any burden.â€

The match will be an historic occasion not only for the Calabrese who often fall shy of international events, but for Italian Rugby League as it will be the first international played outside the north, which includes a number of international or tour matches from 1949 to 1961 and since league returned to Italian soil in 2006.

The FIRFLâ€™s national development approach has allowed the federation to feature players from Northern to Southern Italy as an Italian Tredici first. The squad was selected after training stages with the national based r-Evolution league clubs supervised by national coach Ty Sterry, along with selections from the recent Coppa Italia Finals. It will also feature an all Italian (domestic) born and bred Azzurri line-up for the first time since 1960 when Italy faced a touring star-studded world champions Australian Kangaroos and lost 67-22 in Treviso and 37-15 in Padova.

The Barbarian Warriors are a Rest of the World squad that is similar to concepts such as â€œOther Nationalitiesâ€ (non-GB players in England) that competed mostly in the European Championship from 1949-1960 and also the â€œExilesâ€ from 2011-2013 (non-English players in the Super League). Also the Rest of the World played Australia and GB in 5 matches from 1957 to 1997. In what could be one of the most diverse international selections in the history of rugby league it will feature players representing at least five major regions, including the UK, Europe, South America, Australia and Pacific Islands. 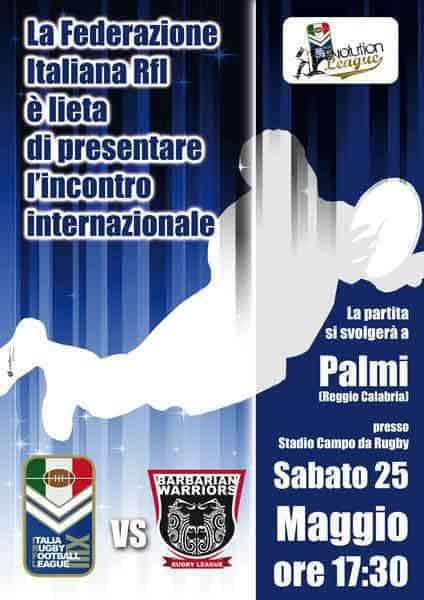