Jonathan Marcinczak, 23 years old, is one of the Italian players born in England happy to represent the Azzurri and his family.

He was born in Bradford and West Bowling was his last team until the start of this season, when he moved to France to start his experience with the Albi Tigers.

â€œWe are going through a re-structual period but we have been playing stronglyâ€, says the man who played his first game for Italy when was just 18 years old against the British amateur selection and Germany, during the Euro Shield 2008.

How was your debut with the Italian team?

â€œIt was amazing to put the shirt on, I felt proud to be italian on that day and it has continued since thenâ€.

When did you first go to Italy?

â€œI was 11. My grandma and her sister and brother came from Avelino, southern Italy. She moved over to England during the war but the family still live on a farm there, in a beautiful and very relaxed place. She also has a sister who lives in Bologna. My first visit to Italy was on the farm and I remember that I helped out on the farm, it was awesomeâ€.

Have you learnt any Italian?

â€œYes, I used to go to italian school when I was 5-12 but as time passed iv forgotten. I will say I know enough to get by but I would love to be fluentâ€.
Whatâ€™s the best thing in Italy?

â€œThe best italian thing is without a doubt the food … itâ€™s amazing !â€

After the RLWC qualification and the last European Shield, what is your next goal with the national team? 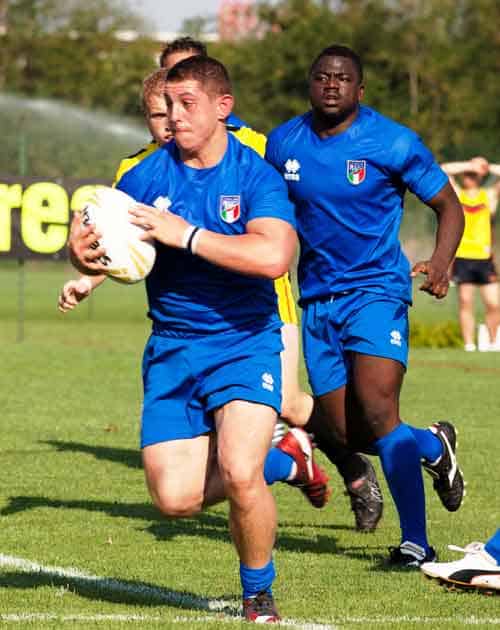