Drake Muyodi has just finished his season in France with St. Gaudens and now is ready to come back to his club XIII del Ducato: â€œ I learnt a lot about the game while in France and I would like to pass it on to my fellow players in Italyâ€, said the ugandan.

After three seasons playing for the three-time Italian champions, the XIII del Ducato and two years playing rugby league in France and with two matches for the Azzurri in the 2012 European Shield, Drake Muyodi said goodbye to St. Gaudens and is ready to come back to Italy for a new season.

â€œIn France things didnâ€™t go too badâ€, explained the ugandan,â€ the championship was very competitive, my team didn’t perform well at the beginning of the season and we lost a lot of games because it was the first time that we played together. It was hard to coordinate things also due to communication problems as there were players who didnâ€™t speak French but at the end we started winning games and I think next season the team will go very wellâ€.

Drake, who played last year played for the Gifi Bias XIII in France, arrived in Italy in 2009 with two of his bothers because of his father (italian citizen), an ex professional boxer has been living in Italy since the end of 70s.

â€œI played in the forwards and also in the backsâ€, said the ex Colorno rugby player, my experience was excellent and i have learnt a lot about playing rugby league, the different running lines and structures, i would like to pass on my experience to my italian team matesâ€
Ready for his fourth season with the Ducato team, Drake’s goal has always been to play professional rugby: â€œmy hope is to achieve my dream very soonâ€, said the man born in 1988.

Talking about life in Italy, he explained that â€œI feel like Italian because I live in Italy and I play for the national team, my father is italian and soon I will get my italian citizenship. I miss Italy because there are many important people in my life live there and Italy is my second home after Uganda. And then, italian food is the best because italians love eating… and I love eating (laugh). I have learnt how to cook pasta, but even if I love eating I hate cookingâ€.

Remembering the good times, Drake said that â€œthe best moment that I can remember was when I arrived in Italy because I was waiting to join my father and also play rugby on a different level as professionalâ€.

â€œHow will this new season be? Well, Rugby league is growing in Italy because the management is very serious about spreading the game around the country. This season is very important for players in Italy because of the Rugby League World Cup… the players have to prove to the coaches that they are good enough to play in the World cup. It’s not about where you play to be considered, the coaches will consider someone’s performance even if he doesn’t play in France, Australia or England, because a domestic player might be better than someone playing out of Italy… Everyone has to be ready. I am readyâ€. 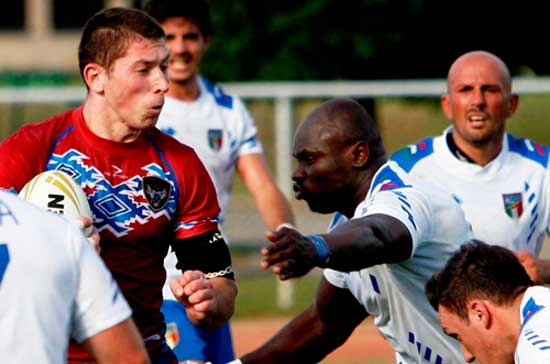