Rugby League has come along way in Italy since 1995. This year for the first time an Italian team will be competing in the Rugby League World Cup.

Today, we meet with Stefano Sarghini, one of the players that restarted the Italian Rugby League back in the 1995.

I’m 43 years old and played rugby union as a back (center extreme wing) for almost 20 years from 1987 to 2005. Before my official farewell to rugby , I played for several Italian clubs (series B, C1, C2) , English (3th National division South-West) and in the Irish (2nd division). I played for the Italian Rugby League selection between 1995 (Sydney, Australia) & 96 (Suva, Fiji) and in the 2002 tournament in Padua. I now live and work in France and I try to keep in shape by playing tag rugby (rugby league version).

What was your first contact with the rugby league?

My first contact with the world rugby league was in San Benedetto in 1989: at that time John Benigni, a former Italo-Australian Rugby League player, played in the local FIR Serie C1 club which I also I was a member. During practice he often proposed rugby league to improve both our defensive capacity and attack. It was at this point that I learnt about this version of rugby and I was fascinated. English coach Andrew Jepson was also in favor for us to use during training Rugby League techniques, so we adopted a “call” known as “Rugby League” which was the key word which meant tackling to the death!

Describe your experience with the Italian rugby league?

My first real chance to play in a rugby league tournament was in 1995: in that year I was in Northern Ireland for 10 months for an Erasmus exchange at the University of Ulster. I played both for the university team and for the North of Ireland Cricket & Football Club (known as North). On Christmas Day of 1994, during my return to Italy for Christmas, John was there to select an Italian team to participate in the World League Tournament to be held in Feb.1995: I was selected along with other players from the St. Benedict rugby club, during this magnificent experience I had the pleasure of meeting the Franchini brothers.

What is your best memory from your experience as a rugby league player?

It is definitely our victory against Morocco during that tournament, it was an unforgettable moment: I also scored a try in that game. I have fond memories also of a great performance against Great Britain in torrential rain the following year in Fiji: I remember an evergreen John Benigni played a magnificent game.

What do you think of the current situation of Italian rugby league, and how do you see Italy in the next world?

I think there has been some remarkable progress and Italy’s participation in the World Cup is certainly a great success. I think that the game of Rugby League is very suitable for the Italian population and it can be played great satisfaction. I believe that Italy will be a surprise the next World Cup.

In the near future will we see a team play from the Marche region play in the Italian Championship?

Its hard to say; recently rugby union has had a remarkable explosion in our region where in 2005 there were 4 clubs and we currently have 20. I think you could form a rugby league team from the Marche region to participate in the summer tournament. 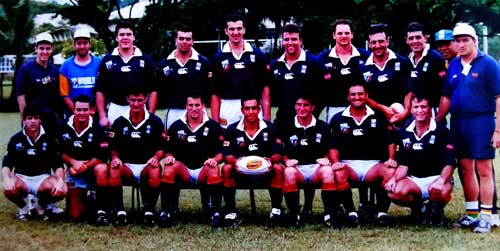