Close to a year from the day that Rugby League the â€œGreatest Game of Allâ€, was introduced to the Seafaring cadets of WÃ¤rtsilÃ¤ Subic Inc. back on the 14th of April 2012, when Philippines National Rugby League (PNRL) board members Rick Hartley, Tony Shibley and Cobi De Leon conducted their first clinic with the cadets of the Finland based company. They have moved on from touch football to full contact Rugby League training!

A month from the day of their resumption of their Rugby League training in 2013, on the 7th April, PNRL board members, Tom Simpson and David Perry commenced full contact training with the Seafaring cadets.

Since the first Sunday in March, WÃ¤rtsilÃ¤ Subic Inc.â€™s Tactical Officer Osmondo Genilo has organized the 54 company trainees who have enthusiastically taken up the â€œGreatest Game of Allâ€. His work with supporting the PNRL since 2012 has been invaluable in allowing Rugby League to be established as a formal company sport.

The setting for the full contact Rugby League training was on the picturest beach of the Subic Bay Boardwalk, located in the Subic Bay Freeport Zone, close to the tourist hub, of the Moonbay Marina Complex. What a setting to have your first experience of TACKLE FOOTY!

At the end of the full contact Rugby League training session Coach Tom Simpson commented:
â€œThe WÃ¤rtsilÃ¤ boys playing full contact loved it, even with their few bumps and bruises, it was fantasticâ€!

The â€œWÃ¤rtsilÃ¤ boysâ€ are fortunate to have Tom Simpson coaching them, because he has been involved with Rugby League for over 50years and is a Level 3 coach; qualified to coach Australiaâ€™s elite National Rugby League teams like his favourite team, the South Sydney Rabbitohs, who, Filipino-heritage player Andrew Everingham currently plays for. He has actually coached the South Sydney Representative teams from junior Bunnies to SG Ball and Jersey Flegg. The â€œWÃ¤rtsilÃ¤ boysâ€ are fortunate to be in the professional Rugby League coaching hands of Tom Simpson!

With the Clark International 9s set for the 19th of October 2013, overseas based Rugby League clubs can enjoy the sites of Subic Bay like the beaches of the Boardwalk and the Moonbay Marina Complex and other interesting sights like the eco-tourism theme parks, and an ocean adventure, in the Philippines’s only open-sea marine park, Zoobic Safari, and the Pamulaklakin Nature Park. 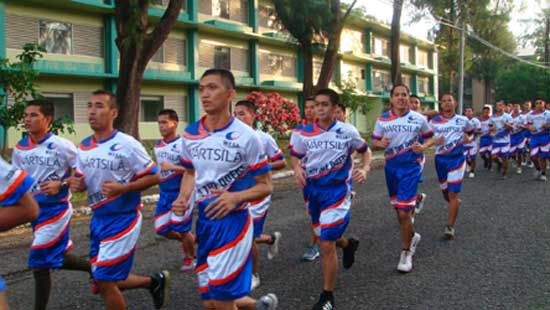 The Philippines has over 7,000 islands to choose from. For those clubs wanting an end of season trip, combining a game of Rugby League and relaxing on tropical beaches. Come along and compete in the Clark International 9â€™s. For further information email either Tom Simpson on tommysimpson12@hotmail.com or PNRL Vice President Clayton Watene on philippinesrugbyleague@hotmail.com

PNRL board members living in the Philippines have been doing their Rugby League development work as volunteers, with no financial support. The PNRL is eager to find financial support to continue their work. So any enquiries and offers of support can be directed to the contact details that is located on the PNRL website www.pnrlf.com