On Friday, March 15, 2013, F.I.R.L. Was invited by Australian Ambassador Mr David Ritchie, for a meeting to talk about the sport of rugby league

The Australian ambassador to Italy, was an excellent host great and demonstrated a broad knowledge of rugby league. He spoke about the NRL, State of Origin, Italo-Australians players, in a very pleasant and cordial conversation.

FIRL Vice-President Tiziano Franchini, said to have been very enthusiastic about the interview and of the knowledge of the Australian Ambassador, the hospitality of the Australian Embassy was amazing, and the topics and discussions will certainly help the development of rugby league in Italy.

â€œAmbassador Ritchie warmly congratulated Italy for having achieved its goal of playing in the 2013 Rugby League World Cup. He noted that this demonstrated the strength of rugby league in Italy. Italy should be very proud of its national rugby league team. In addition, the Ambassador, who is a big fan of rugby league, welcomed the close ties that have been established between two such important rugby league playing nations as Australia and Italy and discussed with the FIRL representatives ways in which these linkages might be strengthened, to the benefit of the great game of rugby league in Italy.â€œ

Fabio Di Pietro, FIRL Treasurer, greatly thanked Ambassador Ritchie and the Australian Embassy in Rome for their wonderful hospitality, and the opportunity to create a close connection with Australia in Italy, and on behalf of FIRL Di Pietro was enthusiastic to put in place, shortly, what was discussed with Ambassador Ritchie. 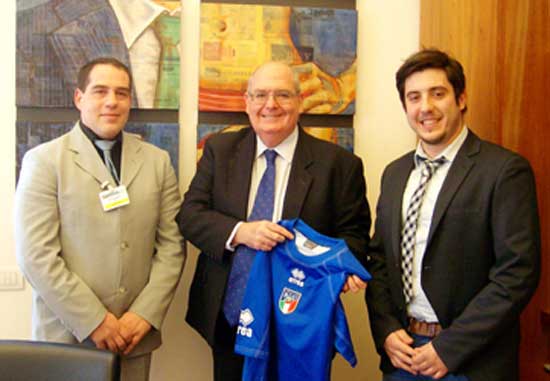